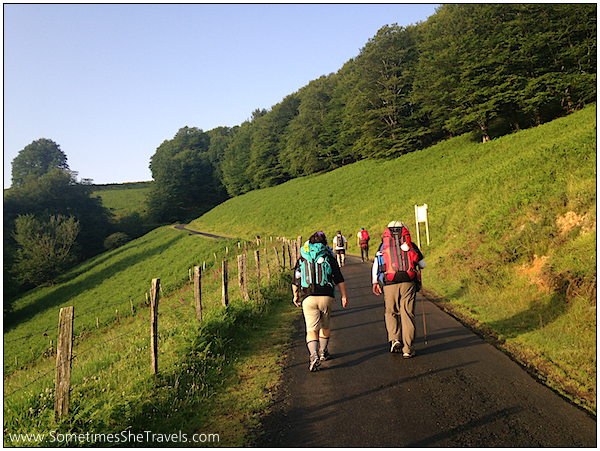 This had to be one of the best days of my life. Walking for hours with new friends through beautiful mountain scenery. Laughing, crying, debating with these pilgrims I had met the afternoon before. It was pure magic.

Hola amigos! Facebook will have to fill in as a blog for the moment; although I couldn’t imagine it, there REaLLY isn’t time to do anything besides walk, eat (can’t imagine how anyone loses weight), sleep, and socialize (can you believe it?)

For those of you who’ve been following the sleep system stuff (lol), what I ended up with turned out great (silk liner, 40F down sleeping bag, and just as important when it comes to sleeping, earplugs, white noise on iPod, and noise reducing Bose headphones).

So far my “nuclear family”, so-to-speak, consists of Olalla, a 28-year-old from Galicia, and three childhood friends from Valencia: Felix, a 58-year-old Marine archaeologist; Adolfo, a 58-year-old landscaping business owner; and Pepe a 58-year-old heart surgeon (and former torero, singer, guitarist, and ranch owner). Last night Felix said during after dinner coffee, “can you believe we’ve only known each other, this little family , for 24 hours?” And Adolfo replied, “And how we are all different ages but it doesn’t matter?” (It sounds different in Spanish). It reminds me of summer camp when I was a kid.

Our “extended family” includes sisters Ana and Yeni from Monterrey, Mexico, Francois and Francoise from France, Geno and Andrea from Brazil, Lillian and Jean Bernard from Frace, Noel from SF, two young Korean men whose names I can’t remember, a Korean couple and a few others. We are all different ages and nationalities, from different socio-economic backgrounds, etc. but here on the Camino, it doesn’t seem to matter.

It’s after 6am now and pilgrims all around me including Geno, Andrea, and Francois, who are in the same cubicle are preparing for day 3, to Zubiri, where my main family has a reservation in an albergue tonight.

What an amazing way to begin the day. Dawn at Orisson.

Dawn in the Pyrenees at Orisson 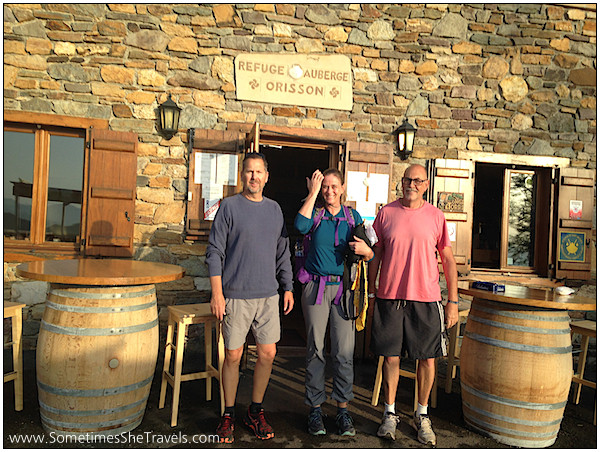 A photo before saying goodbye to Adolfo and Félix, whom I met the afternoon before relaxing at Orisson, although it turned out not to be goodbye at all as we spent the next three days walking together. 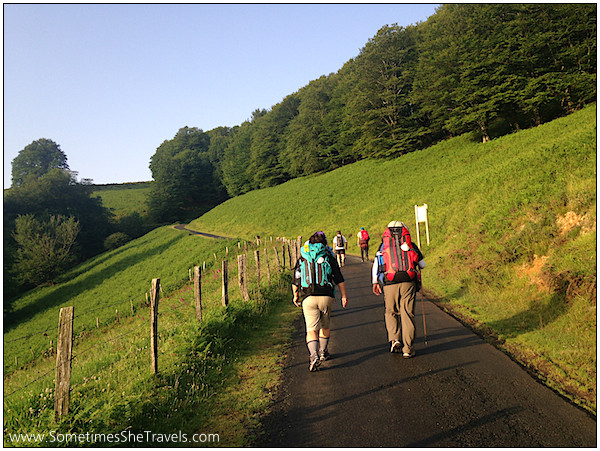 Following other pilgrims headed from Orisson to Roncesvalles.

That is Françoise stopping to admire the stunning wild foxglove on the edge of the Camino. She and I are in regular communication to this day.

Françoise checking out the beautiful purple foxglove just past Orisson

Looking back toward France before heading off toward Spain

Morning light in the Pyrenees 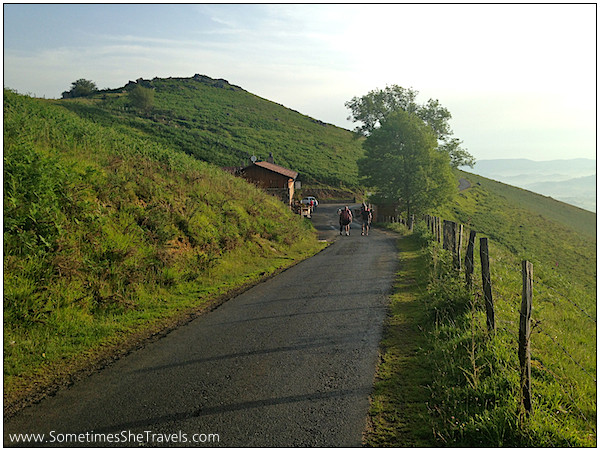 Although I had decided to leave a few minutes earlier and walk on my own, something made me stop and wait for Olalla, Félix, Adolfo, and Pepe. It turned out to be a perfect choice! 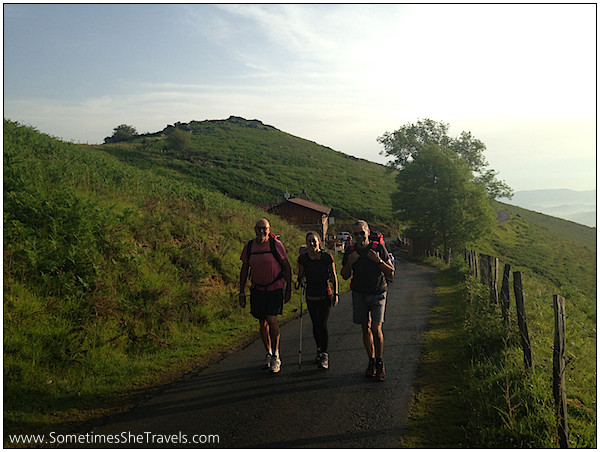 Olalla between Félix and Adolfo. I ended up spending the next several days with them. 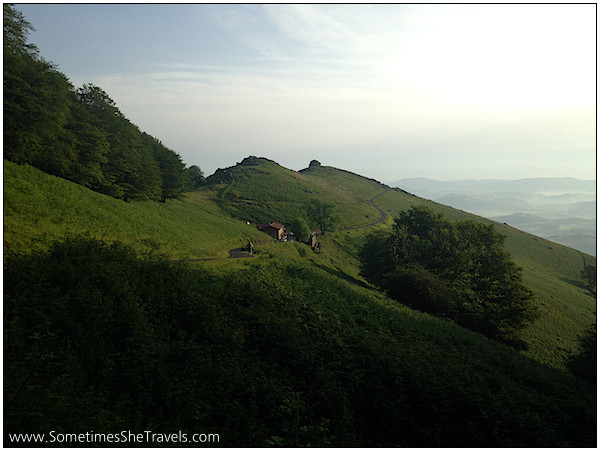 Looking back at Orisson nestled against the green mountain.

The view of the mountains was amazing.

Pepe on The Way

The Trés Amigos, Adolfo, Félix, and Pepe. They have known each other since elementary school.

On top of that mound of rocks stands the Virgen d’Orisson, which for some reason I did not walk over to see. I wish that I had.

Olalla from Galicia and the Trés Amigos, from Valencia

Listening to Pepe waxing philosophical about something. These guys debated all the time.

Time to get back on the road.

These all turned out to be rams, which we thought was odd.

I had met this American the night before at Corazon Puro. She had just had hip surgery but like the tortoise and the hare, always caught up to us.

I was so happy to purchase this hard-boiled egg!

The gang checking out a cross

Rumor has it that these are wild horses.

Signs pointing every which way

Dinner and after dinner at Roncesvalles:

Day 2: Jan , Al, and Benjamin providing the pilgrims with music in the courtyard at Roncesvalles.