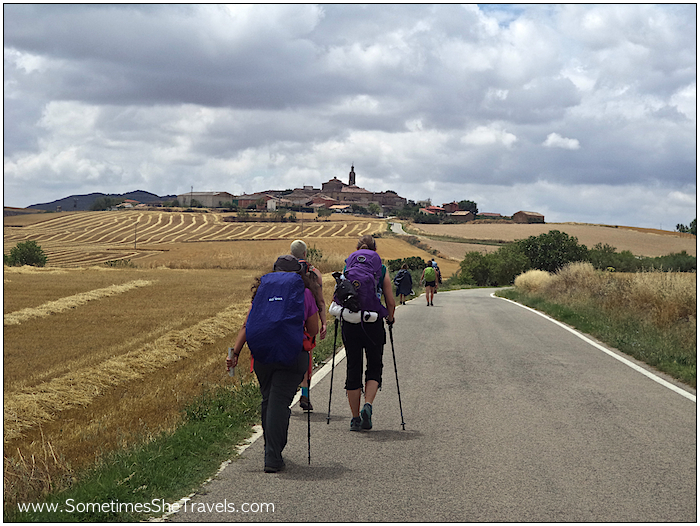 I always forget how much people mean to me but every once in a while, there are those nights where everything goes perfectly And I look around and see The friends I’m surrounded by, And I feel like I wouldn’t replace them For anything in the whole world  – A.M

The night in Torres was the first time since the Tres Amigos had left the Camino Francés back in Pamplona that it felt like Olalla and I truly had developed another Camino “family”.

It had begun the day before on Day 7, when I had told Olalla not long after leaving Irache that I needed to spend some time walking alone. It would actually be the first time since meeting at Orisson that she and didn’t walk together; as an introvert accustomed to spending vast quantities of time alone, I was discovering that spending 24 hours a day with one other person, especially one that I had just met, presented quite a challenge. 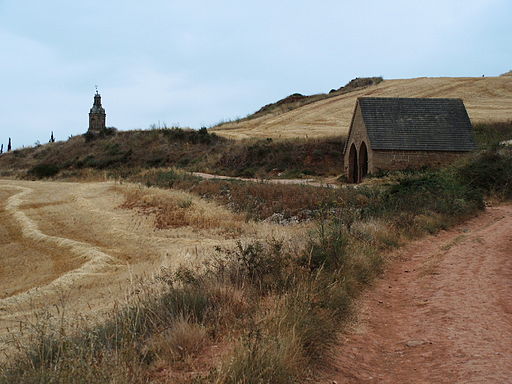 Not long after we parted that morning, I ran into the Mexican sisters, Yeni and Ana, at the Fuente de los Moros (Fountain of the Moors) just before Villamayor de Monjardin. About a mile later, a tall blonde woman began to stride past us. “Buen Camino,” I called out. “I’m Elissa. What’s your name?” She introduced herself as Armanda  and the four of us spent the rest of the day walking together.

Between Villamayor de Monjardin and Los Arcos with our new friend, Armanda, who lives in England

That afternoon when we arrived at Albergue La Pata de Oca in Torres del Rio, several of our friends including Olalla, Kon, Pavel, and Abril and her father, showed up and we all spent the afternoon and evening talking and laughing on the patio and at dinner in their little restaurant. 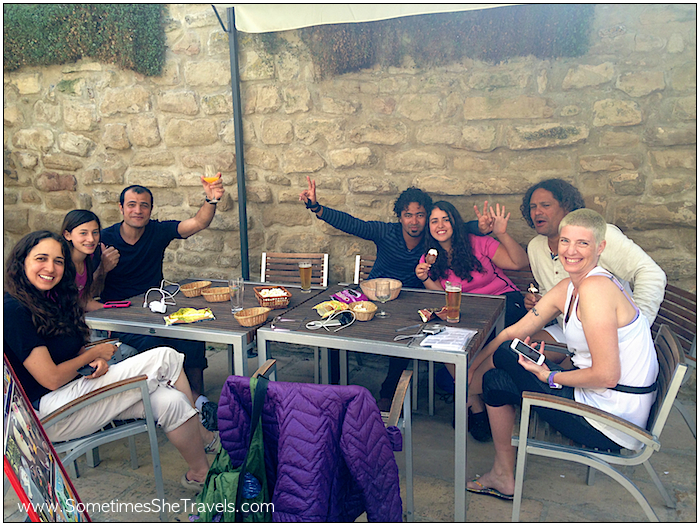 That night, everyone except Armanda and I, got up at 3 in the morning (although they did wake us up to see if we wanted to join them) to do a night walk. It was an adventure Armanda and I didn’t mind missing!

This is the sport recreation center at Ayegui, outside Estella, that provides beds to pilgrims in their basement during the summer.

What is this strange thing, you might ask? I have no idea other than it was some giant machine in the gymnasium at the Ayegui albergue. 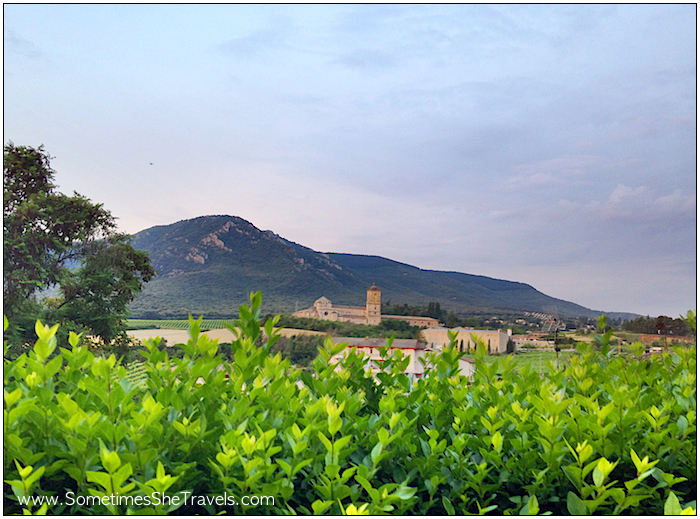 The view of the Monastery of Irache from Ayegui. It won’t take us too long to walk there.

At the free wine fountain in Irache first thing in the morning.

Olalla decided to give the wine a taste. I opted out. 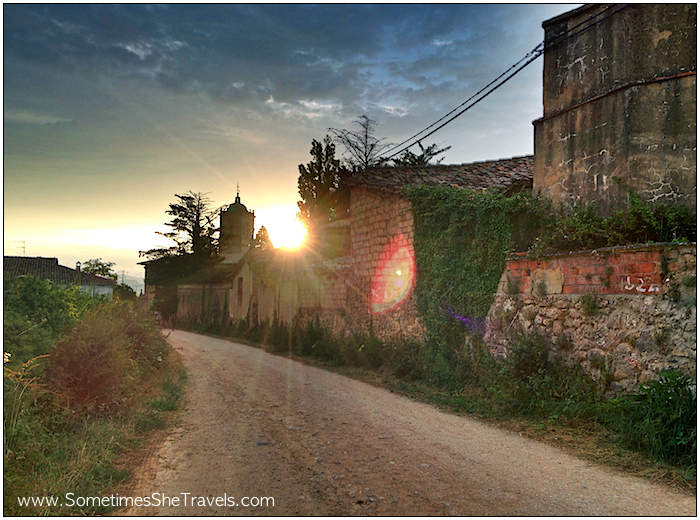 I had the tendency to at least greet, if not introduce myself to just about everyone I came across on the Camino. This couple shared their poignant story about walking the Camino in memory of their son. We continued to cross paths over the next week and shared a special connection.

Olalla and Kon walking up behind me.

You can just make out the tower of the Church of San Andrés in Villamayor de Monjardin in the background. 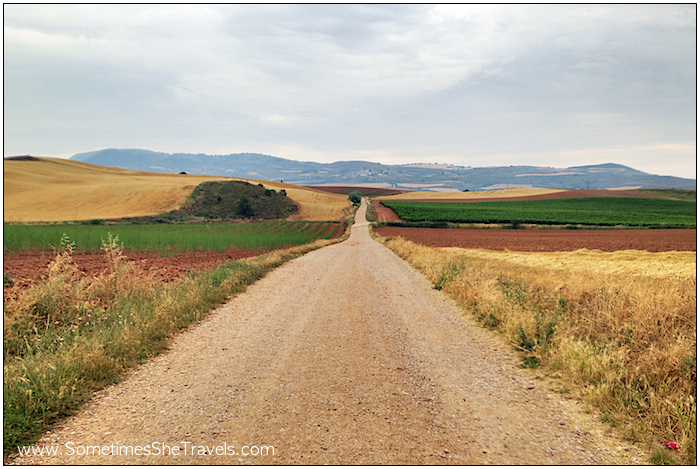 A surprise pop-up café along the edge of the Camino. We decided not to stop.

Yeni and Ana, the sister from Mexico who walked from Vezelay, France.

Happy to have a rest just outside the Church of Santa Maria in Los Arcos. Only 7.5 more km until Torres del Rio!

The garden of the Church of Santa Maria in Los Arcos

Between Los Arcos and Torres del Rio (some of my favorite views on the Camino):

Mmmm, a cool snack after a long walk.

A tired but happy Pavel.

Ice cream for some, beer for others. 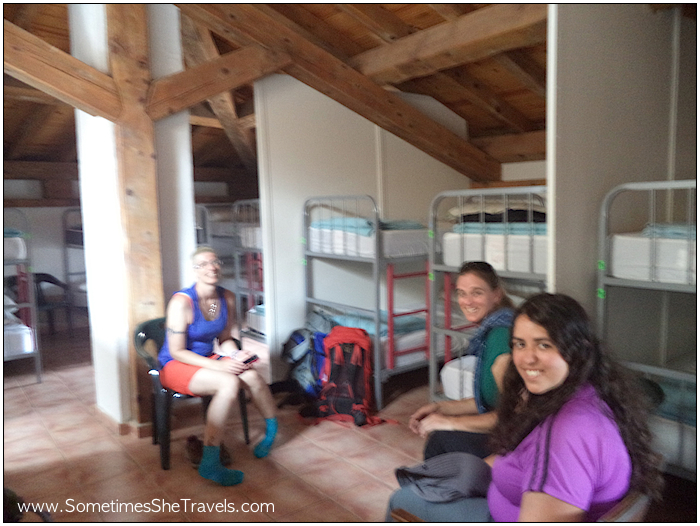 Dinner (I changed my mind so many times while ordering, I was driving the poor hospitalera crazy):

Desert was a chocolate pudding.

I actually got tired of eating french fries. 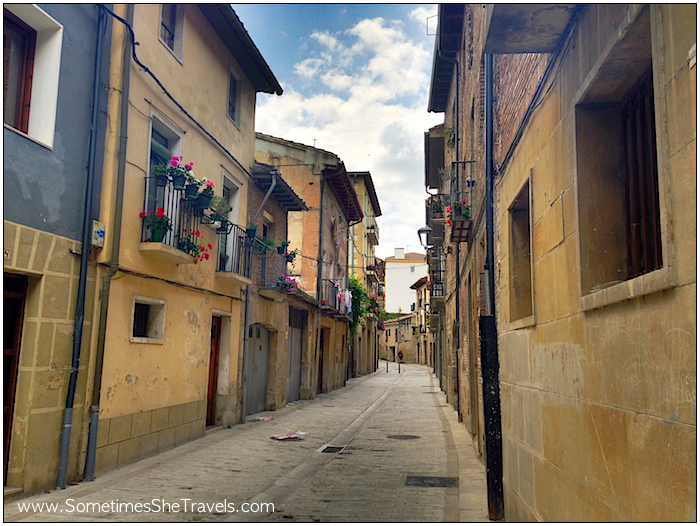