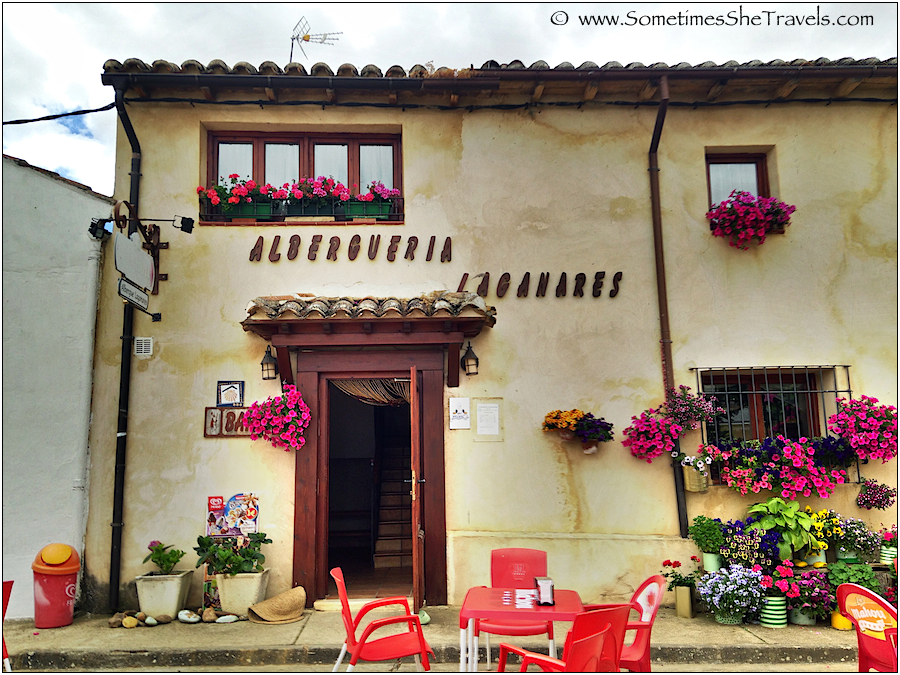 “…I learned that pilgrims from every land–every color, and class, and rank; high officials and the beggar alike–all snored in the same language.”   ―Malcolm X

Huge rooms full of squeaky bunk beds, small rooms full of squeaky bunk beds, basement rooms, smelly rooms, a room in the basement of an athletic community center…family-style dinners with new friends from all over the world, evening sing-alongs from time-to-time (once even lead by nuns), bathroom lights turning off automatically at the most inopportune times…old showers, short showers, token-operated showers, men and women brushing their teeth side-by-side…vending machines for coffee, for soup, for toothpaste, for beer…vying for outlets, vying for gear space, vying for beds…

Experiences at the albergues on the Camino ran the gamut… 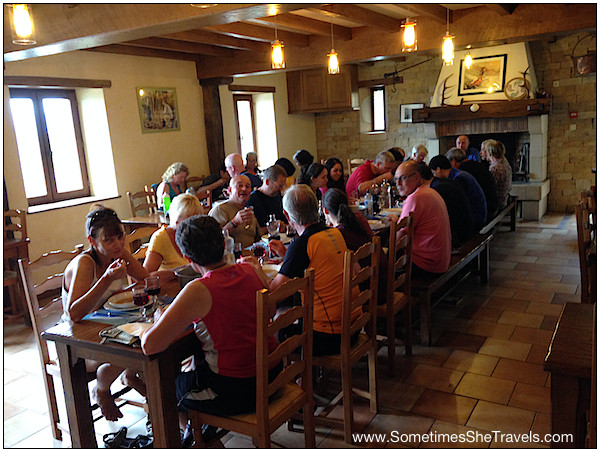 The family-style meal at Orisson my first night on the Camino, when I formed friendships that have lasted well beyond the Camino… (This is one place where I would definitely recommend making reservations well in advance as they do book up.) 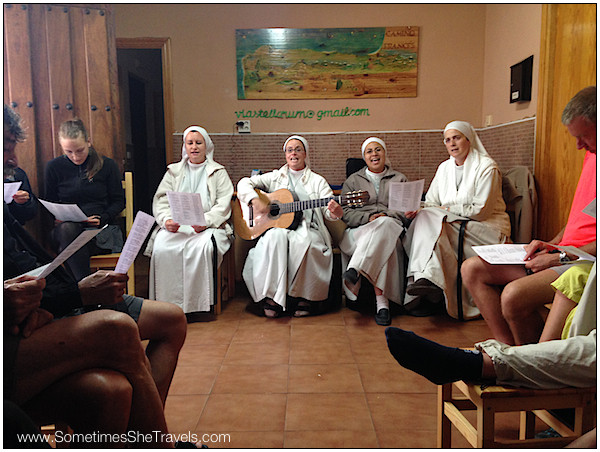 …to a spiritual song sing-along with the nuns at Albergue Paroquial Santa Maria.

The pilgrim hostels, or albergues, along the Camino Francés, were varied and provided all manner of experiences, most welcome, others less so. Yet despite the myriad frustrations that often accompanied the communal living, the rewards far outweighed the drawbacks. 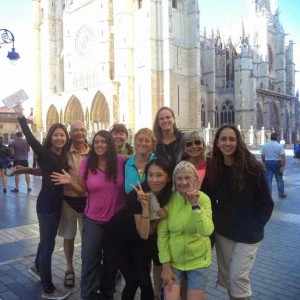 International group of pilgrims at León. Photo courtesy of Yeni B.

There were among us people from all walks of life; a multitude of ages, different socio-economic statuses, and diverse nationalities. In the space of five minutes, one might easily hear five different languages spoken; Korean, Dutch, German, French, Afrikaans, Spanish, and of course, ubiquitous English, which frequently seems to be the main language on the Camino. The youngest pilgrim I encountered was about two months old and the eldest, over eighty. Among the people I met were a marine anthropologist, a surgeon, teachers, retirees, students, people who had lost their jobs or couldn’t find work…

The sense of camaraderie (see my post about the interesting origins of this word) was palpable in most places, although to be sure, everyone did not always get along and there were times when certain people avoided certain others (what happens on the Camino stays on the Camino)… But overall there was a sense of common purpose and a shared journey.

“When I am with a group of human beings committed to hanging in there through both the agony and the joy of community, I have a dim sense that I am participating in a phenomenon for which there is only one word…’glory’.”   ―M. Scott Peck 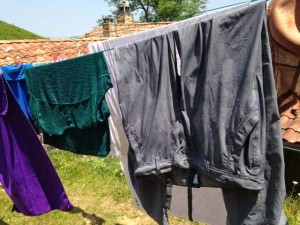 Laundry was an integral part of each and every day on the Camino (well, for most of us, and for the others, we wished it had been) and different albergues provided different facilities. Some had coin-operated washing machines and dryers, some had just the washing machines; the majority had sinks and clotheslines. (I wish I had taken pictures of the facilities in each place so that I might provide you with visuals.)

To ensure dry clothes by morning, laundry was typically the first thing we did upon arriving at our destination (well, after a shower), in order to take advantage of the warm, often hot, afternoon sun. Space on clotheslines was often at a premium and on my next Camino I will be sure to carry at least ten clothespins with me. Pilgrims spend a fair amount of time discussing laundry soap; some carried special laundry bars, others carried little containers of detergent. For many of us, shampoo did double duty as laundry soap. Quick-drying clothing from Ex Officio or SmartWool or one of many other companies almost guaranteed dry clothes by the morning.

Prior to embarking upon this adventure, I had planned to spend several nights at three- or four-star hotels, perhaps even a parador. But when I actually arrived at the cities with the fancy hotels, the last thing I wanted to do was separate myself from my “Camino family”. (The Emilio Estevez movie starring Martin Sheen, “The Way”, really goes a long way in illustrating the amazing camaraderie that can form on the Camino.)

Day-by-Day Breakdown of the Albergues

The night before my Camino began: 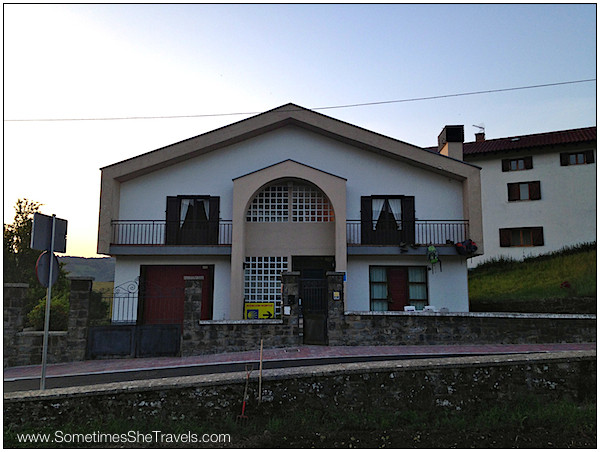 The night before starting my Camino, I stayed at Corazon Puro in Bizkaretta, located between Pamplona and St. Jean Pied de Port. They offer a wonderful service to pilgrims; for around 45E, they pick you up in Pamplona, drive you to their albergue where you are served dinner and have a bed in a small room. The next morning, after you are served breakfast, they drive you to the ____ gate in St. Jean Pied de Port to start your Camino. 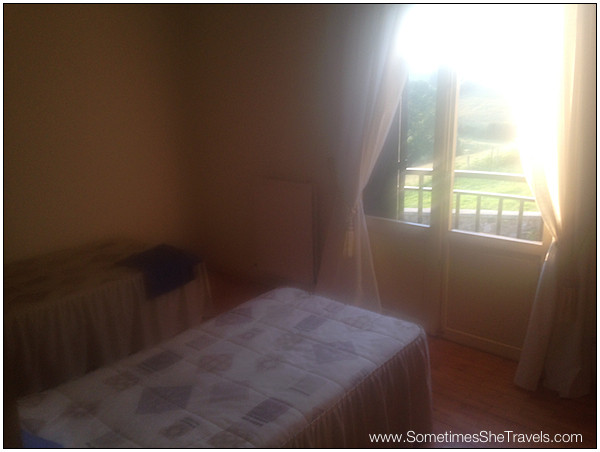 My bedroom at Corazon Puro where I ended up with a private room because they weren’t full. Little did I know at the time how luxurious it was to have a room to myself. 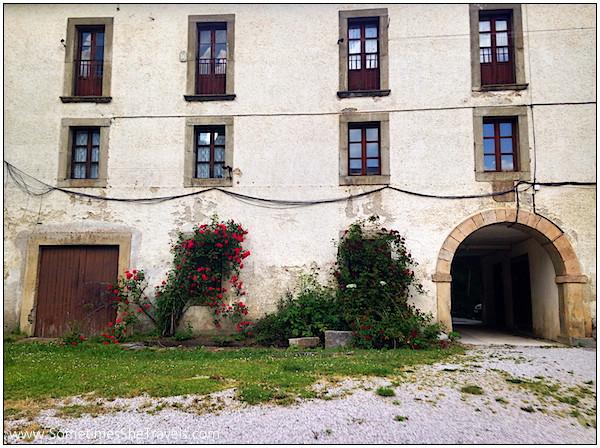 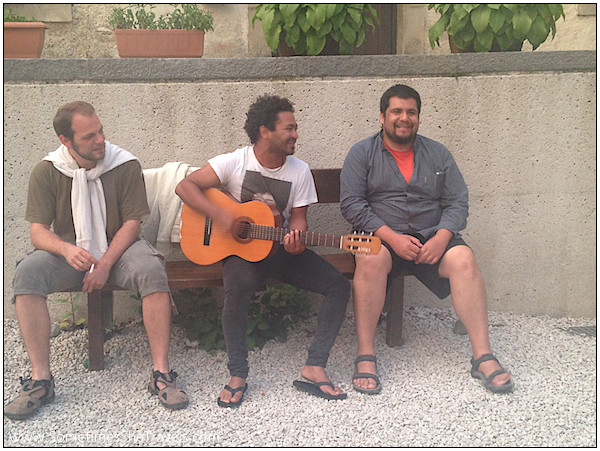 Day 2: Yan(?), Al, and Benjamin providing the pilgrims with music in the courtyard at Roncesvalles. 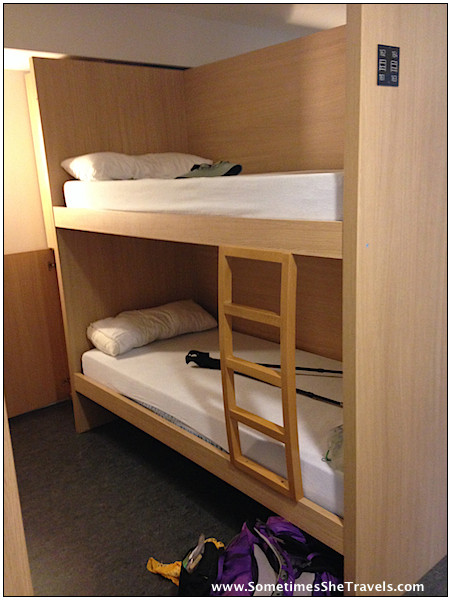 Day 2/Roncesvalles: Some of the most beautiful beds on the Camino in my opinion.

Eating a vending machine breakfast in the dining hall at Roncesvalles before setting out for Zubiri. Thank goodness for “second breakfast”, which always came an hour or two after being on the Way.

Albergue Hutte in Atapuerca. I don’t know what “Hutte” means but “hut” would be appropriate. This was my least favorite of all the albergues in which I stayed. I got the impression that once it had been a barn. It was very dark (despite appearances). Additionally, all my friends stayed at the other albergue in town. How did this come about? When I arrived in Atapuerca and went to the other albergue, a person I didn’t feel comfortable with was already there. Rather than risk being stuck there with him alone (I didn’t know if my friends were going to end up in Atapuerca that night or not), I decided to go to the Hutte. The good news was that I met a very nice Spanish couple and their 12 year old daughter (see the picture below) and ended up walking with them frequently over the next few days.

I have the lower bunk again and was happy to get a bed near the only window.

View from my bed at La Hutte

Sweet Spanish couple who were walking with their pre-teen daughter.

Here you can see that the beds were often pushed right next to each other so you were basically sleeping in a double bed with a stranger!

Yeni and I stayed at the Albergue Municipal in Hontanas. Our friend Keong whom we had known since day 1 was also here with a group of south Koreans and our new friend, Bernardo Clemente, whom we had met in Belorado also stayed here. The architecture was phenomenal. It was a renovated old stone building that combined new and old.

Pilgrim clothing drying in an ancient stone courtyard in Hontanas.

Once again, I scored the bottom bunk. My friend, Kyeong, whom I’d met my first evening on the Camino at Orisson, was in the top bunk.

Entrance to the municipal albergue at Hontanas

Ana and Gael had stopped at the Albergue Municipal in Boadilla, which was at the entrance of the town when walking from Hontanas. There was, however, a long line and I could see that the dormitory was dark and crowded so I decided to walk around town. I looked at my list of albergues and noticed another one called, “En el Camino” so decided to check it out. (I also had the vague recollection of my Camino Forum penpal, Linda, telling me about it.) It looked interesting so I walked through the portal…

When I saw the gateway “En El Camino”, an albergue in Boadilla, I had no idea what awaited me…

And there were hooks in the shower!!!!! Who knew that shower hooks could make me so happy? (My dry sack with clean clothes hangs on one and my scarf/sarong on the other).

I loved the loft although climbing up and down the ladder in the middle of the night was a bit of a hassle and it was a wonderful change not having anyone above or below me in a bunk bed.

The Church at Boadilla as seen from the oasis, “En El Camino” albergue

Albergue Paroquial Santa Maria in Carrion de Los Condes. Wow, what a change from the last albergue. Not only was it packed, here we ran into a huge group of college students from Pepperdine. They were very nice but it was strange to be around a large from of Americans after spending all my time with Europeans the past couple of weeks.

On Day 18, I stayed in Albergue Laganares in the one-horse town of San Nicolas del Real Camino. Visually it was charming. However, because it was the only “show” in town, the locals showed up at the bar around 9 at night and partied until late. It was actually rather surreal because they were so raucous.

Albergueria Laganares in San Nicolas del Real Camino, where I stayed on Day 18

The view from my room at Albergue Lanares

I actually found a book in English. Most of the books I saw along the Camino were in German or French. I spent the afternoon happily reading it.

Albergue La Laguna in El Burgo Ranero. The entrance of this town could have been somewhere on the I-5 near Bakersfield, California. The town was strange. The line at the albergue municipal was huge. So I used my handy dandy list to find this lovely albergue, La Laguna, where I ended up making two new friends, Paule and Louis from Canada. (No photo of them today but they show up later on in the Camino.) Unfortunately, there was a large, young party crowd as well; nice folks but just not my scene, so the next day I walked a much longer stage than I had planned to catch back up with my crew. (I had lost them because of my layover day in Boadilla.)

The yard at La Laguna. i couldn’t wait to stake a claim on one of the lawn chairs.

Beautiful spot to relax after a long walk.

These fellows, an Italian and a Spaniard, invited me to join them for dinner, which they prepared in the kitchen of the albergue. It was enjoyable until the one on the left (behind me) told me he thought I was at least 50. 😉

The Camino’s Not for Everyone…And That’s Okay