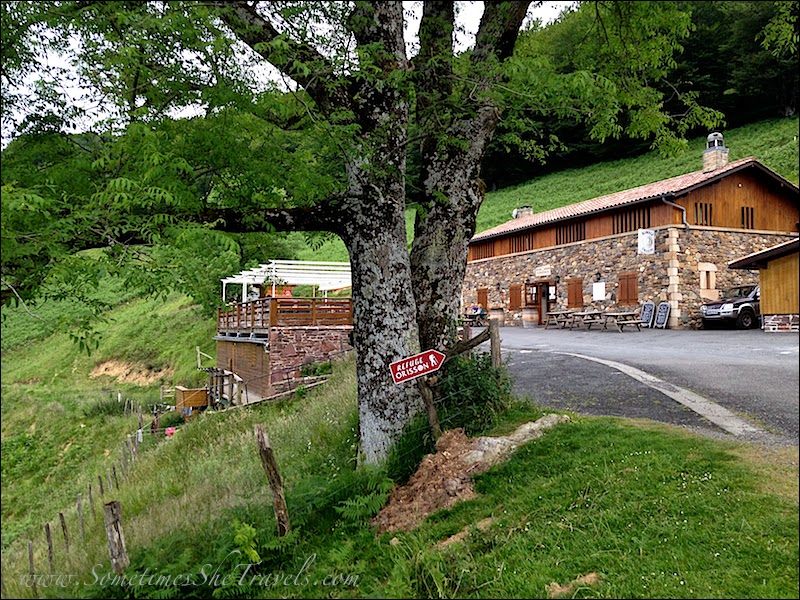 “We are now in the mountains and they are in us, kindling enthusiasm, making every nerve quiver, filling every pore and cell of us.”  ―John Muir, My First Summer in the Sierra

When I finally arrive at Orisson, I am grateful to all the people on the Camino forum who suggested that I stop here and stay for the night. I’m grateful not only because I’m exhausted…from the 7 kilometer (lol) walk, from the jet lag, from the 24-plus hours of traveling…but also because it is in an incredibly beautiful location. The panoramic view of mountains stretching off into the distance is stunning. 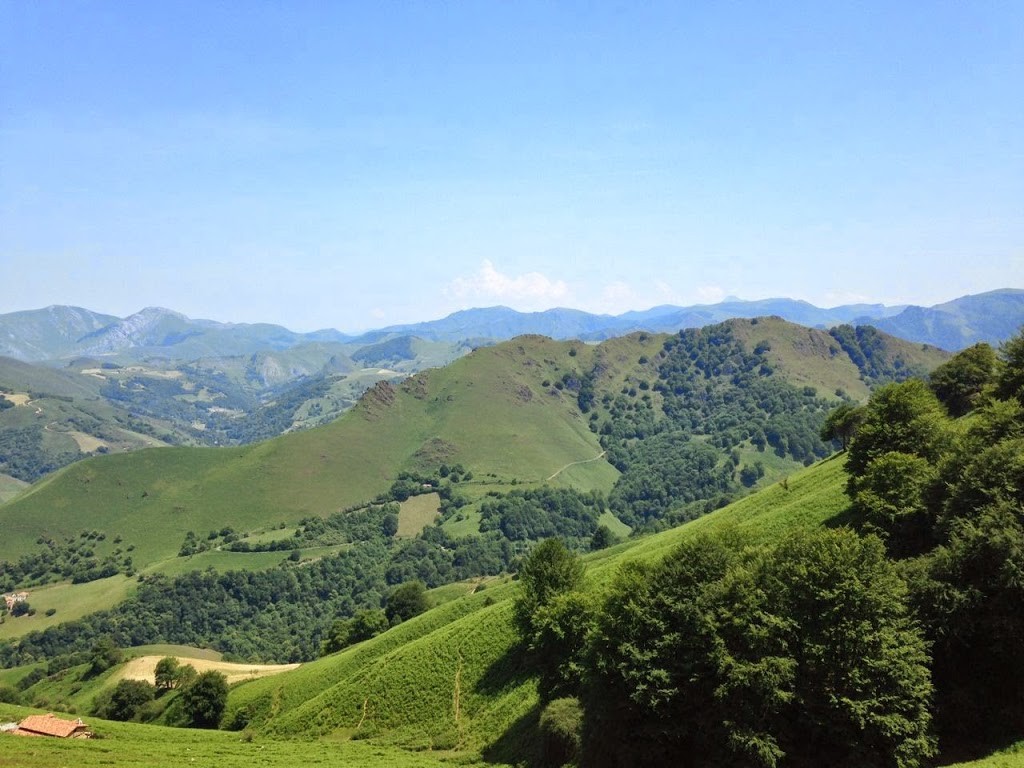 View of Pyrenees from Orisson

(Additionally, although I don’t realize it at the time, Orisson is more than just pretty views and a place to rest my weary body. As it turns out, my afternoon and evening at Orisson will set the tone for my entire Camino. Everyone is friendly, open, and interesting, and I meet several people here…Olalla, Françoise, Kyeong, Ana, Yeni… that I will continue to see on and off throughout the next 32 days; what is known as “Camino Family”.) 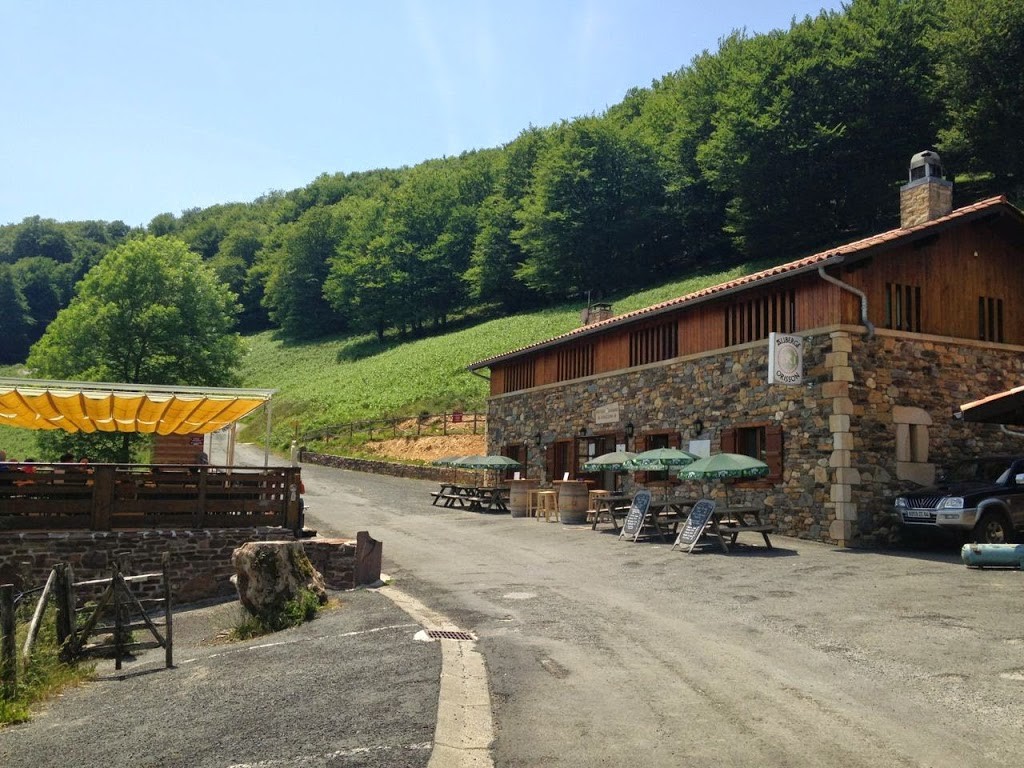 As I approach the charming wood and stone building on the right side of the road, I notice that a shaded deck on the left, which looks out over the Pyrenees, is half full of people eating, drinking, chatting and I look forward to joining them once I have settled in. I enter the building and find myself in a dining hall filled with wooden tables and bookmarked by a bar at one end and a fireplace at the other. A group of diners at one of the tables notices my entrance and calls out a greeting in French, saying something about my being alone; later I find out that one of them is the owner. 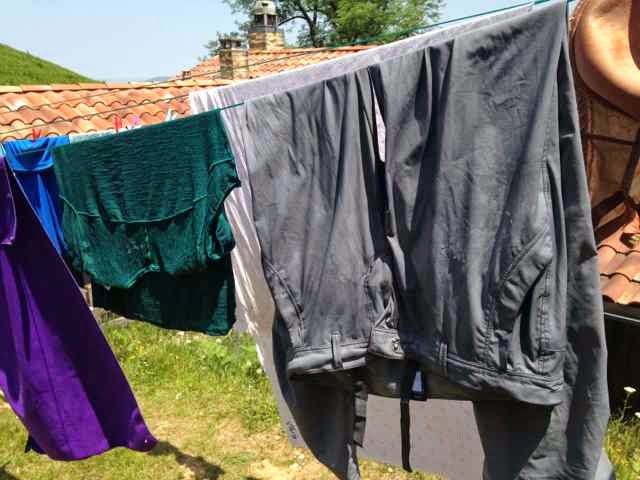 After checking in with the hospitalera at the bar, she leads me around to the back of the building where we remove our shoes before entering the dormitory, a common practice in the majority of albergues. She shows me to a room with 3 sets of bunk beds where I meet my bunkmates for the night, four French women who have traveled together for the past couple of weeks and whose last night on the Camino will be tomorrow, in Roncesvalles. I set up my bunk, shower, then do my first Camino laundry, washing my clothes by hand in the sink. I admire the profusion of wildflowers while hanging my wet clothes on the clotheslines behind the building where they flutter in the mountain breeze and the bright, warm sunlight.

I spend the afternoon on the deck with a book and my Bluetooth keyboard and iPhone, journaling electronically and reading but I also listen to the conversations around me. There is a Japanese couple at a table close by and an international group of people at the other end. At some point (after several beers, judging by the sound of it), an American in that crowd becomes really loud. So loud that I leave the deck and sit on the grass on the other side of a huge oak tree.

At some point, I meet Yeni, from Mexico (also the first “guest” poster on my blog), who has already been walking something like 40 days on the Camino in France and in this moment in the French Pyrenees, I couldn’t possible know that 30 days later, she will have become my closest friend on the Camino, by my side for some of my lowest moments of the trip as well as many of the the best (including one of the most beautiful sunsets I have ever seen and a fantastic swimming day). Later that afternoon we also meet the three Spaniards I will spend the next two days walking with, Félix, Pepe, and Adolfo, all from Valencia, and Olalla from Galicia with whom I will walk the next six days and then sporadically many times after that (keep an eye out for her upcoming guest post).

The evening before, during, and after dinner is filled with animated conversation, mostly in Spanish, and I struggle to understand everything that is being said; wow they talk quickly! I’m fascinated by the amount of debating that takes place between the Spaniards and note during the rest of my trip that heated discussion seems to be very commonplace amongst people from Spain. I like it. 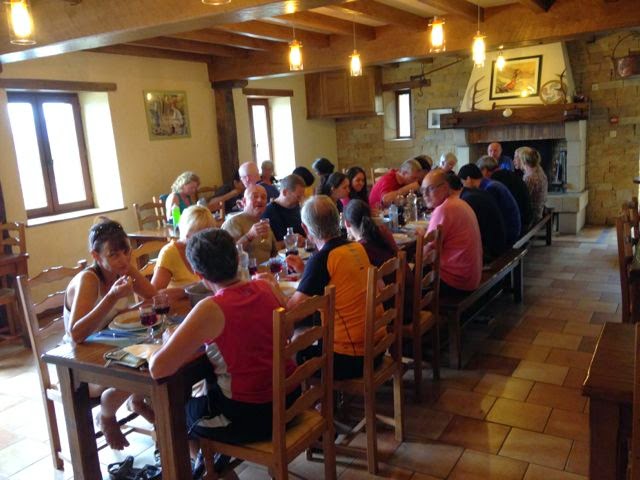 Dinner is served family style in the big dining hall with the fireplace and I end up in a heated discussion with a Spaniard about simple vs. complex carbohydrates, if I recall correctly, and call him a “fighter” although I was trying to say, “debater”. The dinner is fun and lively and there are people of many different nationalities breaking bread together; Mexican, French, American, Japanese, Spanish, South Korean…

After dinner, many of us relax on the deck, again enjoying the view, as we laugh and talk before heading to bed to rest for tomorrow’s big walk to Roncesvalles… 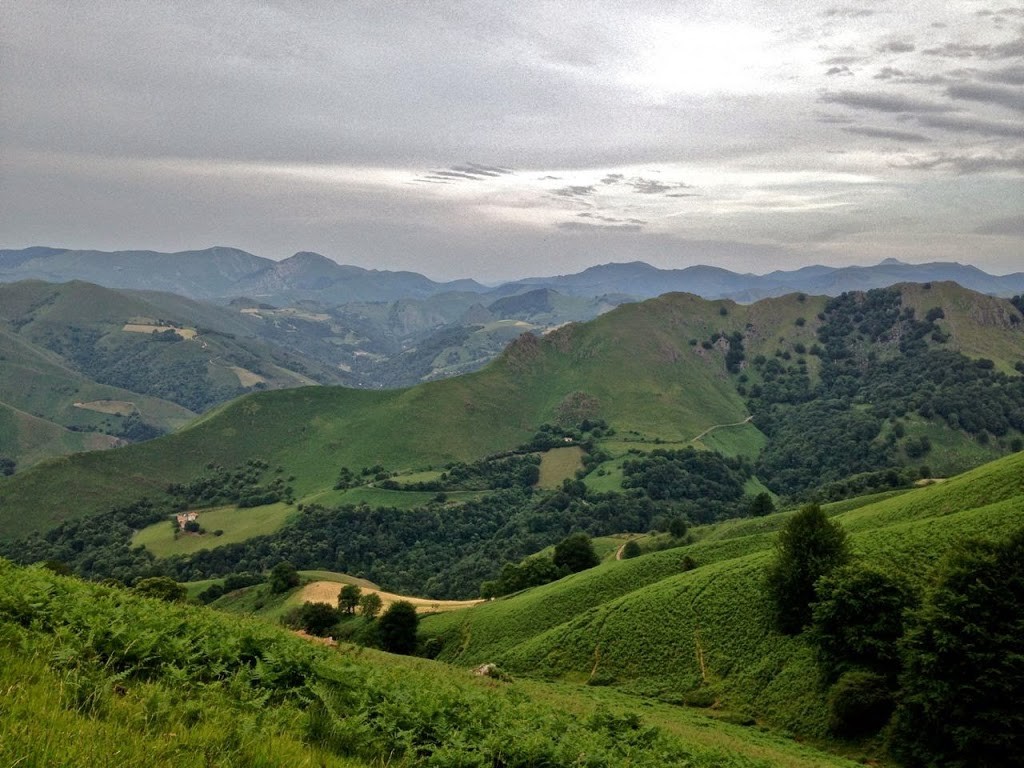 Evening light in the Pyrenees as seen from Orisson

My first Camino family; Olalla and the Tres Amigos, Adolfo, Felix, and Pepe.

View of the Pyrenees from behind Orisson’s buildings

View of the Pyrenees from the deck at Orisson

Deck at Orisson by Ian Haskins