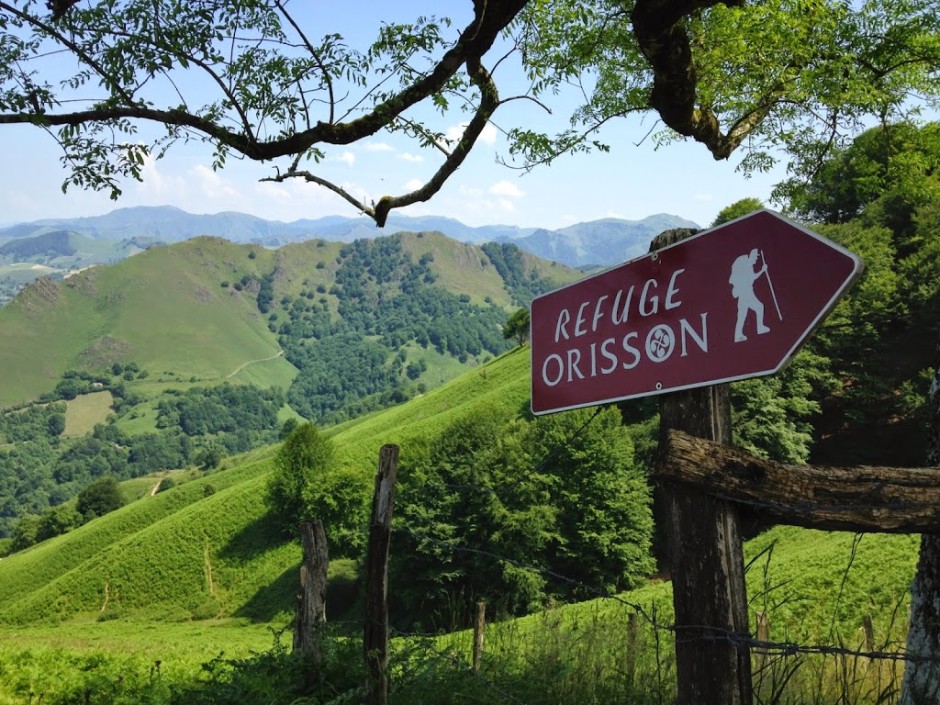 “Climb up into the mountains and get their good tidings. Nature’s peace will flow into you as sunshine flows into the trees. The winds will blow their own freshness into you, and the storms their energy, while cares will drop away from you like the leaves of autumn.”   ― John Muir

The ascent begins the moment I step out of St. Jean Pied de Port at 10:30 in the morning and doesn’t let up for the next 8 kilometers. (To be honest, I thought it was thirteen kilometers. What happened to all the training I did during the past several months?!?). I find myself walking up a quiet country road which eventually opens up to expansive vistas of the foothills of the French Pyrenees. In some ways, I could be in California…West Marin, Sonoma, Napa. In fact, when I post the photos on Facebook, one friend even asks if I’m really in Spain or if I’m just hiding out somewhere else in Marin. The only thing that distinguishes it from home, in fact, are the old stone buildings I pass from time-to-time.

I encounter few people during my walk uphill; two young men from Korea who are sitting on the edge of the road eating, and shortly after, Deborah, whom I met last night at Corazon Puro and who is walking slowly-but-surely despite a recent hip replacement. A few other pedestrians pass by heading the opposite direction and I assume that they are day hikers from St. Jean. 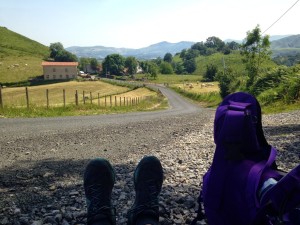 About 45 minutes in, I take a break in the shade of a large tree near a cow pasture. I sit on the gravel next to the road, stretch a little, and guzzle down water. It’s beautiful here and I am content, despite the heat and the ascent.

When I resume walking, it occurs to me that for people unaccustomed to spending time alone, this journey could be as emotionally and mentally challenging as it will be physically. I recall my dad’s quizzical look when I told him that many people had written about the difficulty of being alone so many hours on the Camino with their own thoughts. He didn’t get it. But then again, my dad used to run 30 miles in a day by himself in the High Sierras. It occurs to me that for people like my parents and me, who are accustomed to spending a significant amount of time alone, this aspect of the Camino may not present the same challenge as it might to people who are accustomed to being surrounded by others. In this moment, I suspect that for me the more difficult part of this journey will be in the evenings when all the pilgrims are gathered together in the albergues, sleeping together in dormitories and sharing co-ed bathrooms and communal kitchens. We all have our own stuff!

I climb and climb, enjoying the views, stopping here and there to take pictures, admire the wildflowers, or eat a snack (I’m ever so grateful to the butcher who gave me jerky…) At times I wonder if I am lost since I see nobody else heading this direction. (I will figure out later that the reason why I see no pilgrims other than Deborah and the Koreans is most likely because I got such a late start from St. Jean; the bulk of the pilgrims travel the 25.7 kilometers [16 miles] from St. Jean to Roncesvalles in one day rather than staying over at Refuge Orisson seven kilometers in, as I plan to do).

At around 1:40, three hours after starting out, I round a corner fully expecting to see Orisson and am devastated when it is nowhere to be seen. The good news is that there seems to be a slight descent for half a mile or so, which is a nice break from the relentless climb of the past several hours.

I walk slowly, enjoying the mountain views, anxiously making my way between a few of cows, and finally reach a small grove of trees where lo and behold…I see a sign for Orisson! Then, around the next corner…the albergue!!

(Please click on any photo to view them in LightBox…)

First, but certainly not last church on the Camino…

The fork in the road: left for the Napoleon route and right for Valcarlos.