“A journey is like marriage. The certain way to be wrong is to think you control it.” – John Steinbeck

It feels a little odd creating posts about last year’s Camino so long after having completed it. Ten months, it’s been. I started to write that I wasn’t sure why posting seems like such a chore. Then I began working on this one and was struck by the realization that each post I make usually takes several hours, mainly because of fact-checking. Anyway, I am finally getting around to posting about my fourth day on the Camino Francés last summer….

For some reason, I did not take very many pictures during the first few days of last year’s Camino. I also did not do much journaling so the majority of thoughts and feelings I experienced are lost. My goal this year is to take many more photos and to journal regularly. (I had planned to journal on my smartphone but found it to be very challenging; on this year’s Camino I will take a cheap spiral bound notebook.) 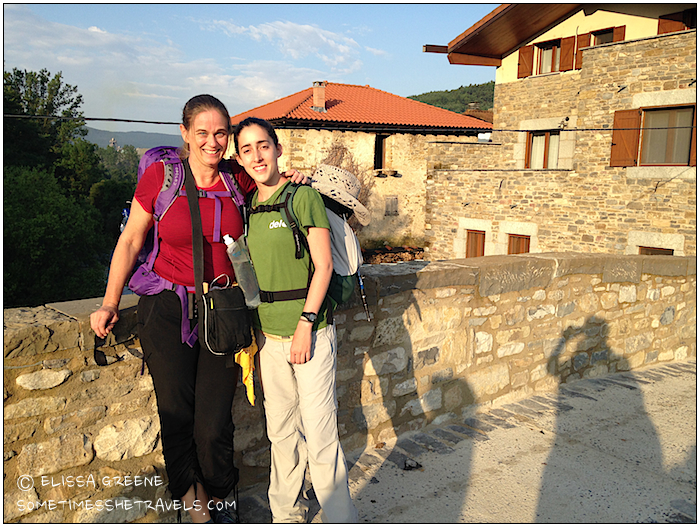 0750 – Olalla from Galicia and I departing Zubiri. Olalla and I met on the evening of Day 1 at Orisson and walked together until Estella. We still communicate regularly and I hope to be able to see her while I am in Galicia this summer. 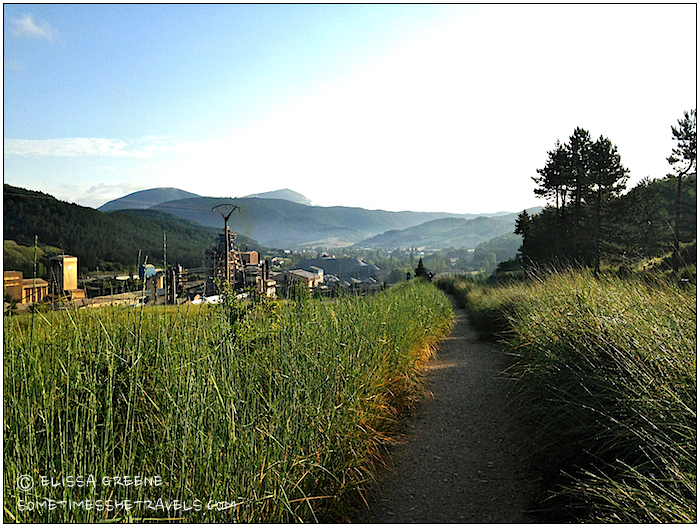 0815 – Looking back at Zubiri and the Pyrenees. It was amazing to think we had crossed that mountain range on foot. 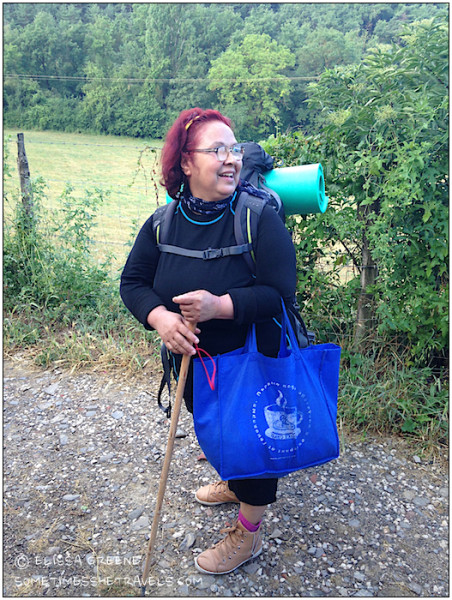 I remember being impressed with this pilgrim. She was struggling with some physical issues but wasn’t giving up.

At some point, we veered a little off the Camino to climb a hill where we visited the church of Saint Esteban, in Zabaldika. It turns out that next to the church was a lovely little parochial albergue. The next time I walk the Camino Francés, I will do my best to sleep there; it was a hidden treasure. I discovered a great write-up about this gem on Ger’s Camino Blog.

It turns out there is a lovely parochial albergue, right next to the pretty little church in Zabaldika. 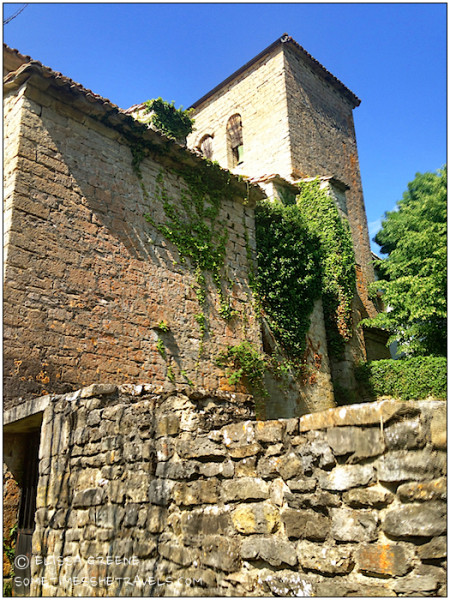 Olalla and I had begun our walk just before eight in the morning, after breakfast at the private albergue in Zubiri. By 12:30, I was ravenous. (I had given away my salami to a man selling postcards in the forest). I remember telling Olalla that I longed for an apple, that I would do just about anything for an apple. Then, lo’ and behold around the next bend we encountered a man selling apples and a few other items under a tree. It truly felt like a miracle. Talking to him, we discovered that he is one of many people who is out of work because of the financial crisis in Spain. (At the beginning of 2015, the overall unemployment rate in Spain, according to Business Insider, was 23.78% with the youth unemployment rate even higher, at over 50%. It is my understanding that there are close to six million people out of work in Spain.) Throughout the course of my Camino I was to frequently come across people like this man, doing what they could to earn a little money. It was one of the best apples I’ve ever tasted!

12:30 – The Apple Man (Facebook post: Two minutes ago I told my companion I really wanted an apple or orange but we are in the middle of nowhere…all of a sudden we round a corner and cannot believe our eyes…) 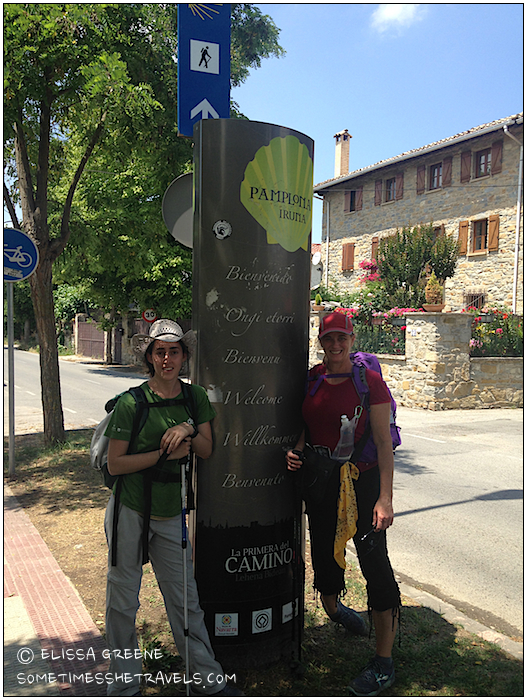 1330 – We finally reached the outskirts of Pamplona. 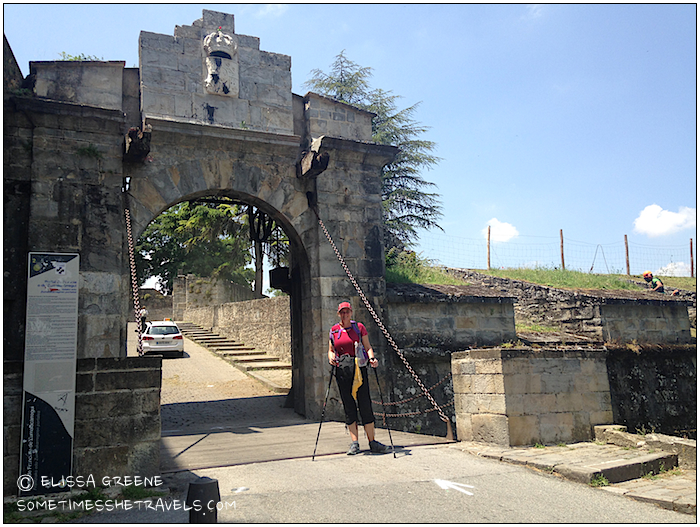 1355 – Entering the old city of Pamplona through the Portal de Francia or “French Gate”.

Rather than eat out, Olalla and I decided to do some grocery shopping and make dinner at the albergue, which had a nice kitchen. It only took a couple more days for me to figure out that I wasn’t really interested in cooking on the Camino and from then on, I usually at a pilgrim’s meal in the late afternoon, then something small like a bread and meat or yogurt in the evenings.

At last it was time to get some sleep so we retired to our bunks and along with 117 other pilgrims, drifted off. 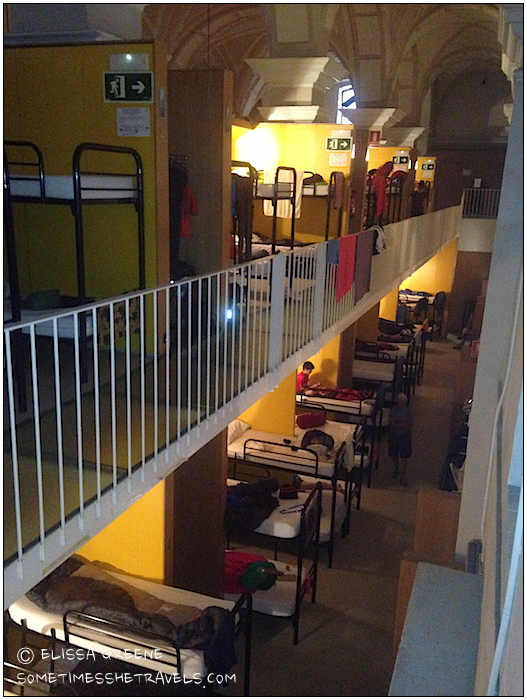 2040 – Good night Pamplona! (If your eyes are good, you can actually just make out Olalla at the far end of the 2nd story corridor by our bunk.)