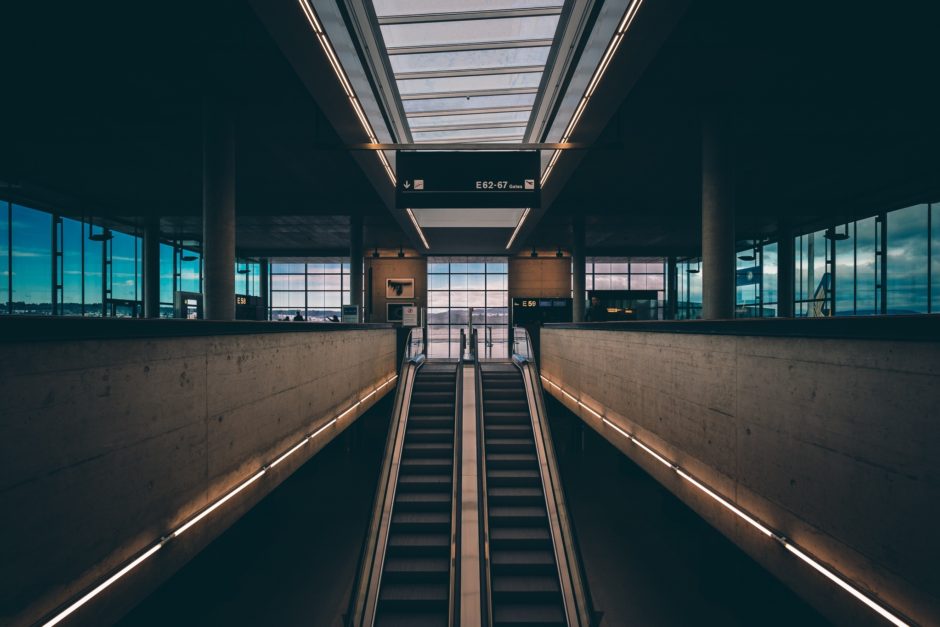 It was exciting to be off on a journey she had looked forward to for months. Oddly, the billowing diesel fumes of the airport did not smell like suffocating effluence; it assumed a peculiar pungent scent that morning, like the beginning of a new adventure, if an adventure could exude a fragrance.”            ― E.A. Bucchianeri, Brushstrokes of a Gadfly

Iberian flight 5292 taxis onto the runway of the Madrid Barajas airport at 10:15 a.m. and I am fairly certain that my chances of catching the 10:45 bus to Pamplona are slim to none.

Nevertheless, I give it my best effort, running up escalators, down hallways, and through customs (to the best of my ability), avoiding the temptation to shove people out of the way as I call out, “con permiso” and “excuse me.” I head straight to the bus stop, arriving out of breath at 11:00, and begin frantically asking bus drivers where the bus to Pamplona is. They look at me like I’m crazy. It came and went 15 minutes ago. I’ve missed it.

I have no way to access any of the alternatives I had skimmed over online because I have no access to the Internet.

I can’t believe I didn’t print anything out.

Eventually, and more than a few tears later (I’m embarrassed to say), instinct (self-preservation?) kicks in and I begin problem-solving. After all, I can’t sit around crying in the airport all day. Tonight I have a reservation at Corazon Puro (which, as of January 2017, is no longer in operation), an albergue in a village called Bizkarreta, outside Pamplona, and tomorrow I begin walking to Santiago from St. Jean Pied de Port.

After running around Terminal 4 looking for a place that sells Spanish SIM cards, with little luck as apparently the bulk of the stores are on the other side of the security check, I finally purchase a 1GB card from a company called Lebara, which is hawking them at a kiosk just inside the entrance to the terminal. I breathe a sigh of relief now that I can look up the phone number for Corazon Puro. I call and speak with one of the owners, Istvan, who kindly checks train schedules and suggests I take the 3 o’clock from the Madrid-Atocha station.

After a couple false starts (buying a ticket for the metro when I really need a ticket for the train etc.) and through kindness of strangers, I finally make it to the Atocha railway station. How on earth, I think, do people who don’t speak Spanish navigate this?!? Even with a decent ability to communicate, I am struggling. Somehow I manage to buy my train ticket from a machine, then head to one of the many cafés in the giant train station to eat my first, but certainly not my last, Spanish sandwich, or bocadillo of the trip. I wash it down with a Fanta Limón and follow it with a strawberry sorbet from a nearby ice cream shop…nothing like food to take the edge off discomfort.

Still on heightened awareness for the pickpockets that so many people online claim are so prevalent, I make my way to the benches outside the boarding area for my train and practically fall asleep on top of my pack (I ended up with the Osprey Sirrus 36 after months of trying out and researching packs). Just getting to the starting point of the Camino has been exhausting and overwhelming; I try not to think of the 481 miles that lay ahead.

The train arrives at the station, the passengers board, I find my seat, and then sit back to watch first the city, then the countryside roll by outside the window. It’s surreal being back in Spain after so many years; how is it possible that the last time I was here was sixteen years ago? I doze on and off during the train ride…I think I’ve been traveling for well over 24 hours at this point.

Istvan, a native of Hungary, picks me up at the Pamplona train station and we head out of the city. Istvan and his wife Barbara met on a Hungarian internet forum for the Camino and shared not only a love of the Camino Francés but also a desire to run an albergue. They met in person, fell in love, and followed their dream! As Istvan and I drive through the bucolic landscape, we pass small villages, green valleys, and, at one point, a large herd of sheep running along the edge of the road.

When we pull up to the hostel, I meet Jack and Christine, a couple from Seattle who are relaxing with a bottle of wine at a table in the front yard as the sun heads toward the horizon. Inside, Istvan introduces me to his wife, Barbara, who shows me to my twin-bedded room on the second floor and emphasizes that I should use only one bed even though I will not be sharing the room with anyone else. 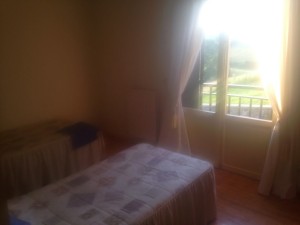 The room is simple and sufficient. It doesn’t occur to me that this is the last time for many weeks that I will sleep in a room by myself. The most prominent and enjoyable feature is a French window that opens onto a teeny tiny narrow balcony, which in turn, overlooks a lovely green valley. 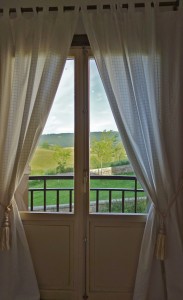 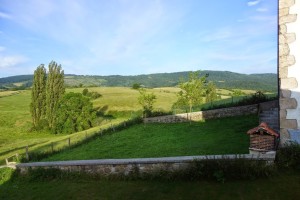 When Barbara tells me that dinner will be served in ten minutes, I don’t linger over the view but make my way to the bathroom where I take a speedy shower to wash the travel grime from my weary body. After dressing quickly and so relieved to be in clean clothes, I join the other pilgrims downstairs for dinner in the dining/living room. In addition to the U.S. couple, there is another woman from the U.S., a teacher named Deborah who is in her sixties. We eat a hearty meal comprised of a turkey-vegetable dish, a small salad, and one of my favorites, Spanish tortilla, or what I like to think of as the Spanish version of quiche or frittata.

The moment we finish eating, I excuse myself and head to bed. It’s almost 9 already and I am exhausted, having been awake for over twenty-four hours.

I prepare my sleep system, which has turned out to be, after (ironically) exhaustive trials, a permethrin-treated Tyvek sheet, a friend’s silk bag liner, and my new extra long REI Halo down sleeping bag made specifically for women. By now it’s nine and despite my intention to read, I am ready to crash.

But lo and behold, just as I turn off the lamp, someone begins using a chainsaw somewhere near the hotel. Are you kidding me?!?! I think. Fortunately, there is more to my sleep system; an iPod with several white noise tracks, a pair of earplugs, and a pair of noise-canceling Bose headphones. That system in place, the chainsaw fades into the background and I quickly fall asleep.

Although I awaken a couple of times during the night, each time I immediately fall back to sleep and awaken in the morning feeling refreshed and ready to really start my journey…

Have you ever had a meltdown in an airport?

Departing for the Camino