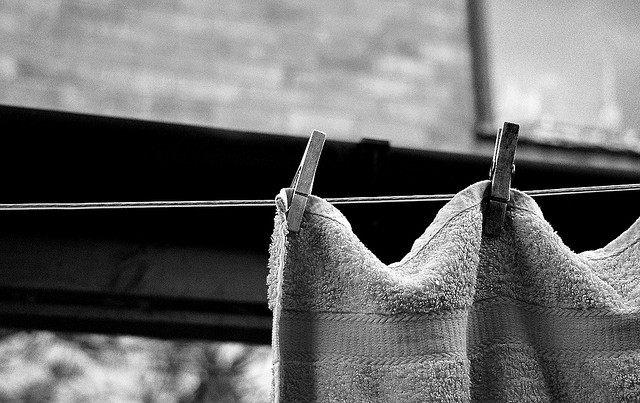 Since when did towels come to be considered “gear”? I have actually spent at least two hours over the past few weeks researching towels. Towels!!!

At first I assumed I would purchase and take a microfiber backpacking towel but then I began reading posts in an Camino Forum about towels (believe it or not, there are entire threads about towels. Well, two entire threads.)  It turns out, however, that those microfiber towels, in addition to being expensive, are known to be “clammy”, “odorous”, and “non-absorbent”, and what’s more, they take up a lot of room in one’s pack (though since I’ve purchased a 46-liter, that should really be an issue.) Oh, and the ones from REI bleed. They’re no longer at the top of my list.

Come to find out, there are quite a number of other options. A length of muslin, for example, is light and will dry quickly but is not as absorbent as your basic terry cloth towel. There are also “waffle” towels, multithread towels, and homemade raw silk towels. But why not get creative? Some people use a sarong (known in many places as a kiva-kiva), while others swear by a shemagh and still others, cotton baby diapers (or nappies, if they are in the UK). And many people use plain ol’ cotton dish towels, including my mom.

So now I’m looking for an old, threadbare standard terrycloth bath towel. As I type, it occurs to me that Dad might have just what I’m looking for as he still uses the towels (well, towel remnants) he and my mom received for wedding presents when they were married in 1967. That’s right, 1967.

I am also in the process of experimenting with using a piece of an old flannel sheet. It’s lightweight and fairly absorbent and, most importantly, ultra-cheap (since I already have it). But enough about towels…

Today I returned an emergency bivy blanket and a buff to REI. Boy are buffs popular. I’d never heard of them before I began planning this trip but when I watched the video showing how many different ways there are to wear them, I was sold. I ran out to REI and bought one for $27. That’s right, $27. Then, once again, I started considering my budget and it occurred to me that I have many bandanas; why not use one of those? Now certainly the buff has many more options (did you watch the video yet? It’s quite entertaining. And if you don’t like that video, just look it up on YouTube where you can find videos from Japan, the UK, New Zealand, etc.) But I think I’m willing to sacrifice the flexibility for the cost. Hopefully I won’t regret that decision.

Moving on to sleeping gear or, sleep system. Argh! Sleeping bag or sleeping liner? Since I’m traveling in June and July in all likelihood the weather will be very warm. However, many of the Albergues are in old stone buildings (I think), which might not be warm.

The past few nights at home, I experimented with sleeping in a CoolMax sleep liner, noting that the temperature in my room fluctuated between 60 and 67 degrees. I definitely needed a blanket for most of the night and my down comforter for part of the night, in addition to the liner. So today I purchased an REI Travel Sack, a pseudo sleeping bag, which has a temperature rating of 55F degrees. It cost $60. The sleep liner was $62! Now wait a second. Hmm. Weight is where the liner wins, coming in at 11.6 ounces while the sack is 27 ounces, more than double. Yuck. But according to my spreadsheet, I’m doing okay on weight. Additionally, I have read many posts from people who ended up mailing their sleeping bags home (or at least sending them ahead to Santiago) because they didn’t need them. I’m going to try it out and see how it goes.*

So what else did I buy today? (Reaches into her backpack.) A compact toothbrush in its own little case for $2.50. In purple. A clothesline. I know they have them at the Albergues but a number of people wrote that they fill up quickly and having one’s own is often convenient. $15. I’ll think about it. Last but not least, an adapter plug for European outlets. I know for certain I will take my iPod. Any other electronics remain to be seen. I’m still debating the merits of an iPad Mini vs. a Kindle Paperwhite. (I thought the Mini would be good for blogging but quite frankly, I’m not sure how easy it would be using that non-keyboard keyboard. I’d really prefer to go to Internet cafes along the way but I’ve heard they are essentially obsolete. Oh well, I’ll have to save this for another day.)

*While I was warmer in the REI Sleep Sack 55 than I had been in the CoolMax liner, when the temperature went below 60F, I was not warm enough even after donning long johns and a fleece jacket, and wool socks. After doing some research, I discovered that a “comfort rating” is the lowest temperature at which a woman is warm enough on average. REI does not have a comfort rating listed but the comfort rating for the NanoWave 55 (which has 9 ounces of fill to the Sleep Sack’s 6 ounces of fill) is 60.1F. The NanoWave 45 has 14 oz. of fill and a comfort rating of 56.1F.

Next step is to find out average temperatures on the Camino in June and July. I doubt there’s any way to find out the temperatures in the dormitories of the albergues… (I know that there will be blankets available at most places but where there aren’t, I could end up sleep-deprived.) Average temperatures in Logroño, Spain (claimed by some to be the hottest part of the Camino); average high June 78F, average low June 55F. Boy, I had completely different ideas about it, I thought it was going to be in the 80’s and 90’s.