The latest guest post is by Suzanne, a fellow pilgrim I met in the beautiful city of León my twentieth day on the Camino. Although our paths crossed many times between León and Santiago, it wasn’t until after we’d both returned home and I asked Suzanne via Facebook if she would be willing to guest author a post about her experience walking the Camino with her daughter that we began to develop a friendship and discovered we have much in common. Here is her story….

People set out on pilgrimage for a variety of reasons: To seek forgiveness for a transgression, to work through a problem, to look for a religious awakening, to give thanks for a reprieve such as overcoming a life-threatening illness, or as an ending of a way of life or the beginning of a new one. Everyone I met along the Camino was very respectful of this highly personal calling. Not a single person asked me why I was walking. The more likely question asked was, “How did you become aware of the Way of St. James?”

“I was now the one who walked slower, I was the one who lagged behind, who could not always keep up with the quick step of youth.”

My first knowledge of the Camino de Santiago de Compostela came on another pilgrimage in November 2011 with my mother and our Philadelphia church, Christ the King. My father had passed away in 2004, and my mother asked me to be her companion so she could go along to the holy sites of Portugal, Spain, and France, visiting the shrines of Fatima, Santiago, and Lourdes. I agreed but secretly wondered if I had the patience to tend to the needs of an aging parent for ten straight days of traveling with a tour group while keeping a smile on my face and kindness in my heart. I can sometimes be short in temper and curt with my tongue. 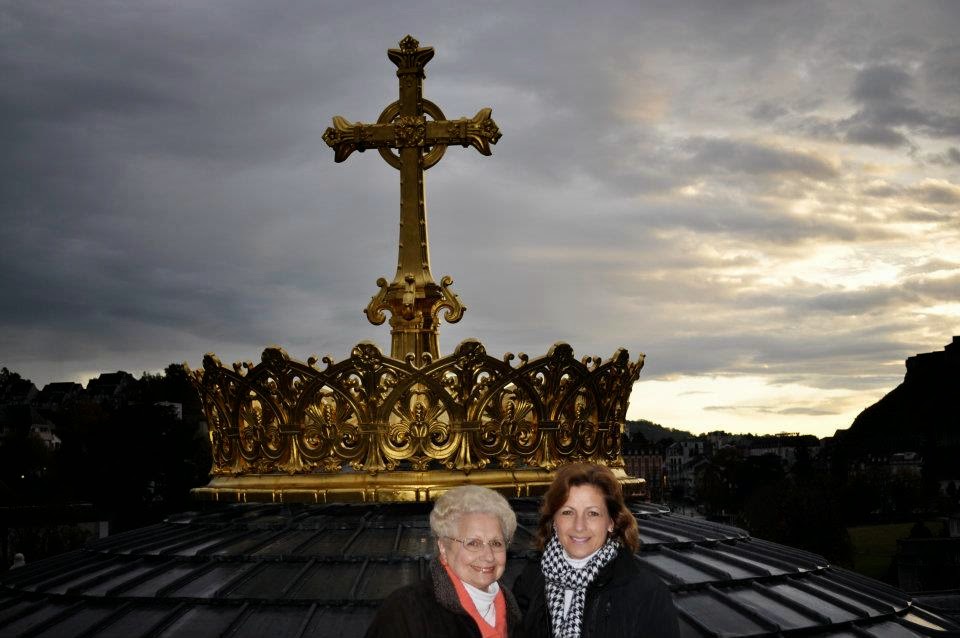 Suzanne with her mother in 2011 visiting the holy sites of France, Portugal, and Spain

For instance, the morning we arrived in Fatima it was pouring; the day seemed dismal. Each time we were inside, it poured. Each time we stepped outside, however, the skies turned off the spigot. As we came around the corner to view the shrine for the first time, I was hit with such emotion I couldn’t even speak. Later as we were walking to mass following another downpour, the skies opened up to a beautiful blue expanse and a rainbow arched over the shrine.

“St. James was beginning to call me.” 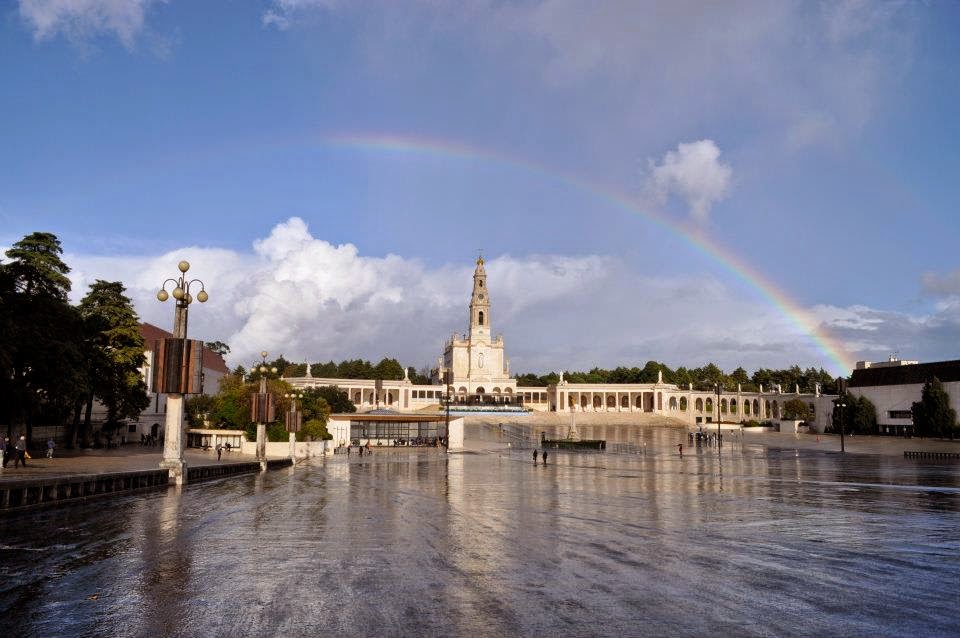 Rainbow over The Sanctuary of Our Lady of Fátima in Portugal.

There were too many coincidences not to have a heavenly involvement. Every place was special and wonderful. My eyes were opened to many things on this trip. Later, upon our return home, my mother commented that she had really wanted to go on this pilgrimage because she felt that she was meant to go, but as things transpired, she felt that I was the one meant to make the pilgrimage.

While in Santiago on that trip with my mother and our church, I witnessed a pilgrim in full gear walking into the Plaza del Obradoiro in front of the Cathedral. It was raining, and she had a rain poncho covering her and her backpack. Her husband greeted her and they embraced. He held her face in his hands, and tears were running down her face.  It was such an emotional scene to witness, and it made a big impact on my soul. Even though I knew nothing about the Camino before this time, and did not understand the magnitude of her achievement, I felt like I was part of this experience. 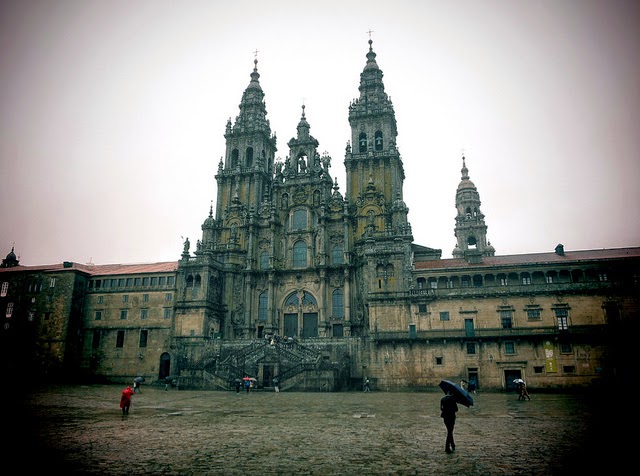 Once inside the cathedral, I visited the crypt where relics of St. James are enshrined in a 19th century silver urn below the main altar. I then waited in line to climb the stairs behind the high altar to embrace the 13th century statue of St. James and utter the customary saying, “Take care of me St. James.” So many pilgrims over the ages have walked these same steps that there are well worn impressions in the stone stairs.  It was such a moving experience. Our pilgrim group attended the Pilgrim Mass at noon and were blessed to witness the swinging of the Botafumeiro after Holy Communion. No words can I write that would give justice to the experience of seeing the censer gracefully swinging high in the transept with smoke trailing, the smell of incense spreading through the sanctuary, and the music stirring my heart.  St. James was beginning to call me. 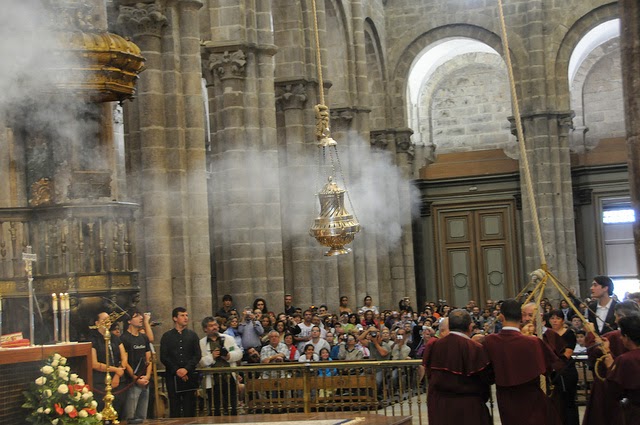 After returning home from that initial pilgrimage, I took my family to see the movie “The Way” directed by Emilio Estevez and starring his father Martin Sheen. The movie further inspired me. On film I again saw the sights I had seen of the cathedral, but now came to more fully understand and feel the significance of the pilgrims touching the pillar of Saint James as peregrinos have done for centuries upon finishing their camino. So many have done so that there are indentations in the shape of fingers in the column.  The movie touched me and made me want to pack a backpack and start walking. I asked myself if this was something that I could ever do, could I walk that far to earn a compostela? What would my experiences be?  Who would I walk with?

I don’t think my family “got” the importance of the camino and the way it was calling to me. I expressed an interest, and they likened it to hiking the Appalachian Trail.  They didn’t talk about the religious and spiritual aspects of the pilgrimage; instead they focused on a camping and backpacking trip, an accomplishment of distance walking.

“What began with my mother was realized and accomplished with my daughter.”

The idea was pushed aside for about a year.  I would poke around on the internet every once in awhile, but it wasn’t becoming a reality.

My daughter Julia brought the topic back up when she was home from college over Christmas break. She would be graduating in May, and proposed that she and I walk the camino that summer before she began her career search in earnest. Julia wanted to walk the Camino Frances starting in St. Jean Pied de Port, France all the way to Santiago, a distance of 775 kilometers!  I didn’t know if I physically had it in me to walk that far for that long. 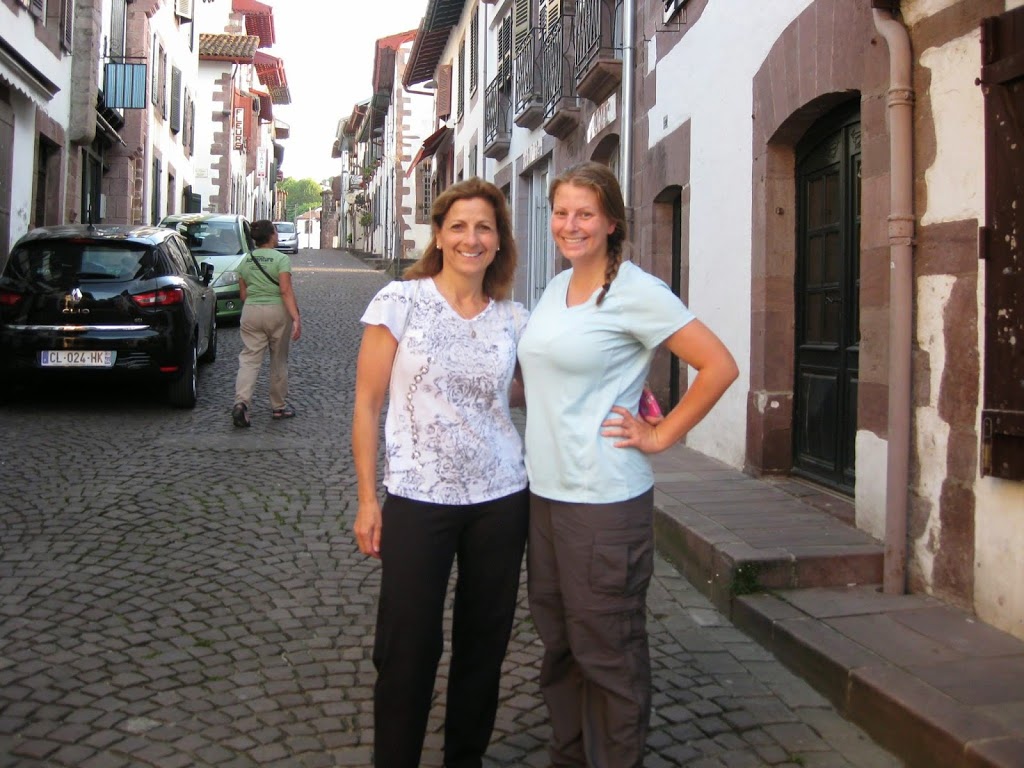 Suzanne and Julia in St. Jean Pied de Port the day prior to beginning their pilgrimage

We began to train separately; Julia down at school, and me at home. I was getting so excited as I researched, purchased the correct clothes and gear, bought plane tickets to Madrid, bus tickets to Pamplona, and developed a rough itinerary.
Many questions were raised. Were we training adequately? Would my high school Spanish come back to me enough to make my way? Would all my hopes and expectations be met? Would I feel the same way walking into the cathedral as a peregrino as I did when I was first there with my church hearing the whisper of St. James that turned into a strong voice calling me, calling me back to Spain?
What began with my mother was realized and accomplished with my daughter. The struggles I sometimes felt with my mother on my first pilgrimage, I am sure were felt by my daughter on our Camino. I was now the one who walked slower, I was the one who lagged behind, who could not always keep up with the quick step of youth.  I was the one who took just a bit longer to rise out of her chair after a stop for café con leche along the day’s walk, who took longer to stretch my legs and ease my achy joints.  So many times I whispered, “I am sorry, Mom, for not having enough patience with you.” 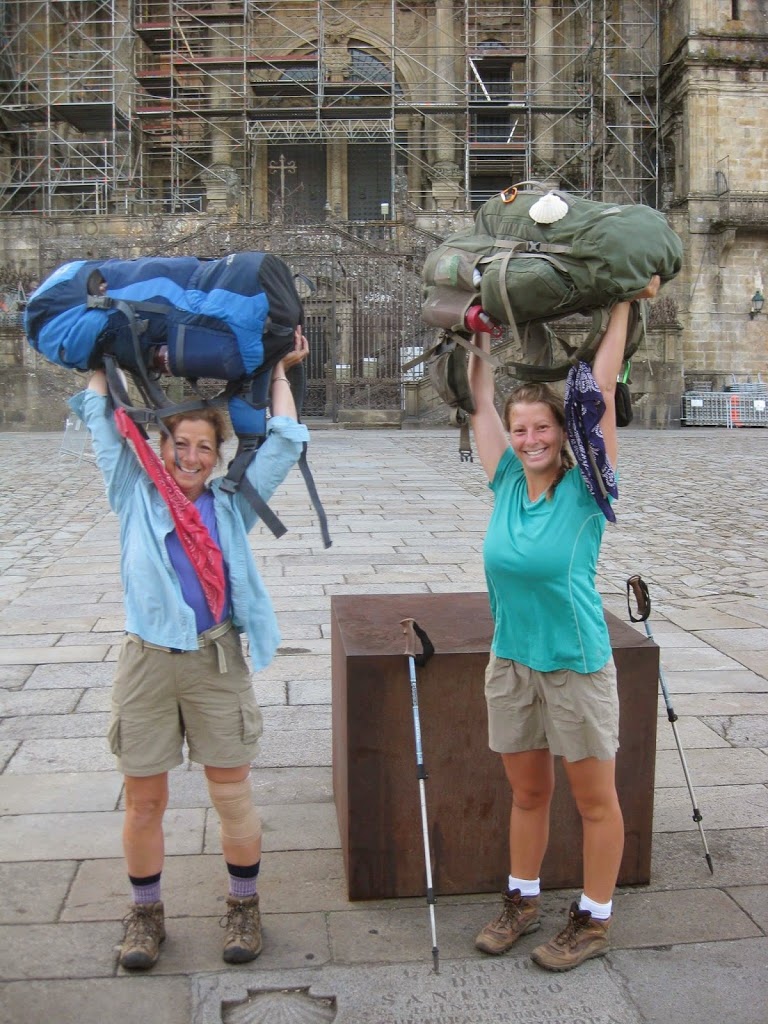 Suzanne and her daughter Julia in front of the Cathedral of St. James, having achieved their goal

I kept a journal along the way and wrote in it each and every day. I wanted to capture all my thoughts, feelings, and insights, so I wouldn’t forget them as little villages became entwined and mixed up in foggy memory of tiredness. The gifts I received along the way have changed my life. I have many friendships the world over. My life has been enriched from all the people I met and bonds I have formed. It is hard for me to return home from such an experience and slip back into my old life. St. James continues to call, and I feel the pull to walk again. 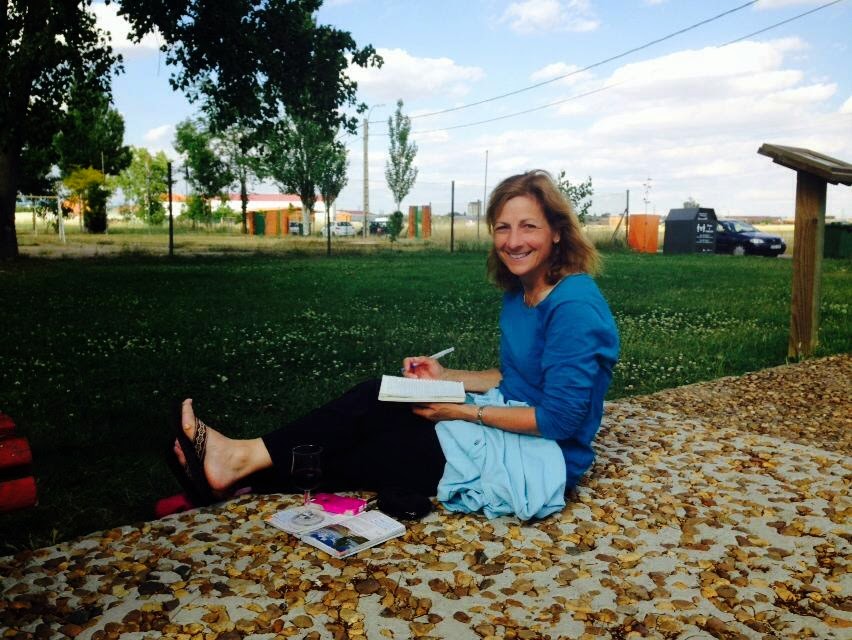 About the Guest Author

Suzanne, who celebrated her 53rd birthday sunbathing on the beach at Finisterre, “the end of the world”, following her Camino, was born and raised in a middle class family in Philadelphia, Pennsylvania. Family vacations in her childhood consisted of day trips to the Jersey Shore so it wasn’t until later in life that Suzanne discovered the joys of overseas travel, which has opened her eyes to different people, cultures, and foods. She loved Spain, and the Camino, and can hardly wait to go back. Her hobbies include being outdoors, walking, cooking, traveling and meeting people. These days Suzanne lives in Virginia, where she works in the library of the local elementary school.

Suzanne and another member of our Camino Family, Clarence, relaxing by the pool at Albergue Cuatro Cantones in Belorado

Suzanne and Julia at Cruz de Ferro at sunrise

Suzanne and Julia walking with St. Francis of Assisi monks who had stayed at the same albergue, Casa de Jesus, in Villa de Mazarife, the night before. (Incidentally, I also stayed there the same night and had borrowed Suzanne’s iPhone cord to recharge my phone.)

The Continued Call of the Camino