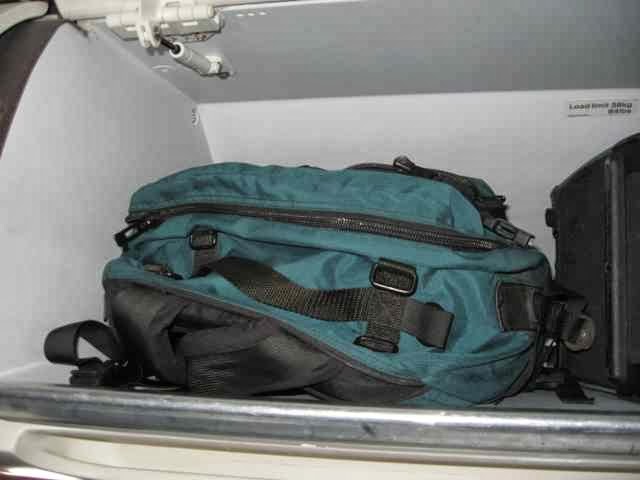 Mom’s old green Eagle Creek traveling backpack, the kind that converts into a soft suitcase by cleverly hiding the straps in pockets, rests in the seat beside me on the airporter. The bus heads south on 101 toward the San Francisco airport where I will catch United flight 805 to San Jose del Cabo, a town on the Baja peninsula I last visited almost twenty years ago while on a mountain biking trip with Backroads, the active travel company I worked for at the time.

When I booked this Baja trip during the first few days of 2014, the idea of walking the Camino wasn’t even a bleep on my radar. It would be three more weeks before I would watch the movie that would inspire me to plan the trip of a lifetime. Now, in some ways, I wish that I hadn’t booked a hotel in SJdC, so that I would be free to travel from town-to-town on the peninsula, staying where I please each night. At the time I booked my trip, however, that was an option that didn’t even occur to me. I thought that I needed a base, somewhere to call, “home”, even for five days, perhaps because it has been so long since I have traveled outside the U.S.A.

As we cross the Golden Gate Bridge, I look at the reflection of the sun shining brilliant on the water and attempt to see it through a traveler’s eyes. The air is hazy, whether with smog or simply a marine layer, I don’t know. There is not a cloud in the sky and I can feel the warmth of the sun on my face through the window. I glance out the right side of the bus and catch my breath as I see the cliffs of the Marin Headlands reaching into the Pacific Ocean, like giant rocky fingers. Although I made a point to sit on the left side of the bus so that I would have a view of the City by the Bay, it is the landscape out the right windows that captures my attention.

It is the beauty of nature that appeals to me most, followed closely by the beauty and ambiance of anything old. The modern city of SF doesn’t really float my boat and I spend little time there, despite living nearby. My thoughts drift to the pictures of the Camino I have seen online and I reflect back to reading an article by Francis Tapon, in which he expressed his dismay that so much of the Camino is close to roads rather than in wilderness. When I first read that article, I began to second guess my decision to walk the Camino as I am not a huge fan of walking alongside highways or through modern cities. But further research has lead me to believe that I will be mostly delighted by the surroundings on the Camino. If I wanted nothing but wilderness, I would be walking in the Dolomites or on the Pacific Crest Trail of the Sierra Nevadas. I adore the ancient cities and towns of Spain (I spent almost a year living in southern Spain [LINK] in my twenties) and look forward to walking through them.

The rounded spire of a church just off 19th Avenue catches my attention through the tinted bus window, crowned by a cross, and my thoughts turn to the cathedral in Santiago and how it will feel to arrive in the plaza after walking hundreds of miles.

As of 7 o’clock last night, the items I’d chosen to take on this trip were all packed into a rolling carry-on suitcase. Then I began researching transportation from the airport to San Jose and after reading posts by travelers on Trip Advisor, realized that I would prefer to take a local bus rather than a shuttle or taxi. One man noted that since he and his wife were using backpacks, they simply walked a couple hundred meters from the terminal to a nearby bus stop. At that moment, I remembered that Mom’s 90’s style backpack was lying at the bottom of my closet. It occurred to me that I could probably walk with the roller bag too but why not do a little trial run for the Camino? Of course, this isn’t the pack I will be using and I’m carrying significantly more items on this trip than I will be on the Camino (or I’m in for trouble) but still, it’ll give me a taste for what is to be my life for 30-plus days this June and July. 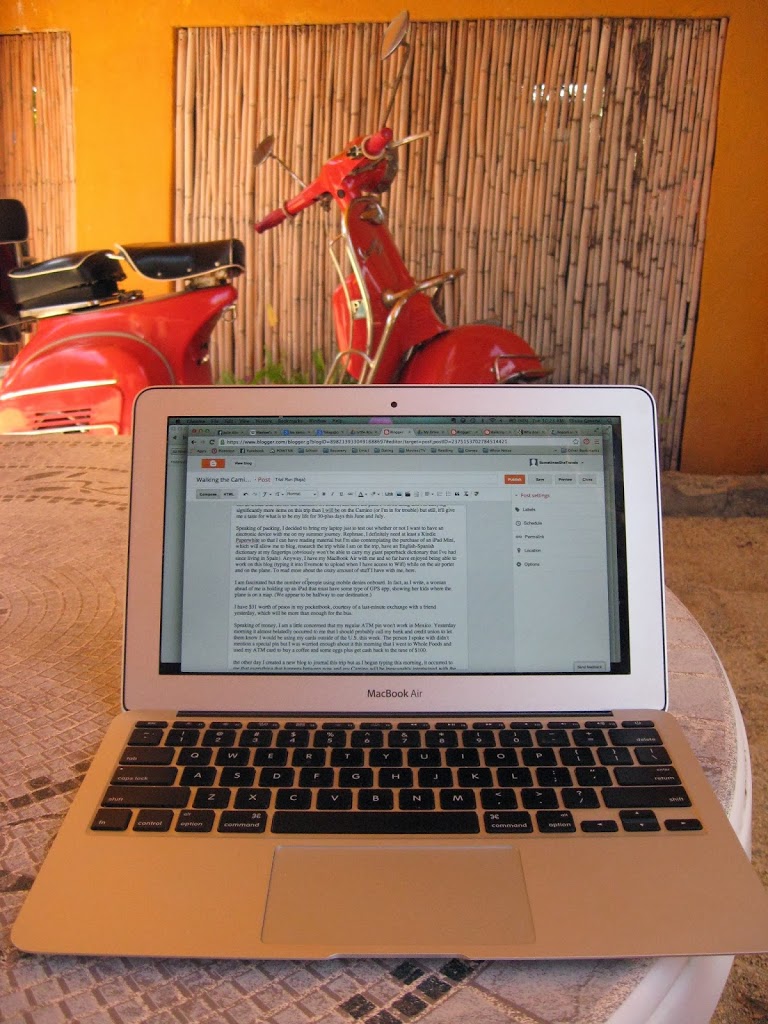 Speaking of packing, I decided to bring my laptop just to test out whether or not I want to have an electronic device with me on my summer journey. Rephrase, I definitely need at least a Kindle Paperwhite so that I can have reading material but I’m also contemplating the purchase of an iPad Mini,

which will allow me to blog, research the trip while I am on the trip, have an English-Spanish dictionary at my fingertips (obviously won’t be able to carry my giant paperback dictionary that I’ve had since living in Spain). Anyway, I have my MacBook Air with me and so far have enjoyed being able to work on this blog (typing it into Evernote to upload when I have access to Wifi) while on the airporter and on the plane.

I am fascinated but the number of people using mobile devices onboard the plane. In fact, as I write, a woman ahead of me is holding up an iPad that must have some type of GPS app, showing her kids where the plane is on a map. (We appear to be halfway to our destination according to her tablet.) A family of three in the seats across the aisle from mine all have their own tablets and each is playing his/her own game. (Note: the played the entire way there AND we were seated across from each other on the return trip where they again played their separate video games the entire flight.)
I have $31 worth of pesos in my pocketbook, courtesy of a last-minute exchange with a friend yesterday, which will be more than enough for the bus. (Note: This turned out to be very convenient. It was wonderful not having to exchange money at the airport. Thanks Andrés.)

Speaking of money, I am a little concerned that my regular ATM pin won’t work in Mexico. Yesterday morning it almost belatedly occurred to me that I should probably call my bank and credit union to let them know I would be using my cards outside of the U.S. this week. The person I spoke with didn’t mention a special pin but I was worried enough about it this morning that I went to Whole Foods and used my ATM card to buy a coffee and some eggs plus get cash back to the tune of $100.

The other day I created a new blog to journal this trip but as I began typing this morning, it occurred to me that everything that happens between now and my Camino will be inescapably intertwined with the Camino.

I wish my return flight were leaving later on Friday. My flight this morning left earlier than I would have liked. In fact, I arrived at the airport late. (Mom, I know you will appreciate hearing this!) Let’s see if we can figure out why. I took the 8:37 Airporter, thinking I would arrive at SFO by 9:30. Turns out, passengers are supposed to arrive at the airport two hours prior to take-off time. Ooops. What’s more, the airporter was late. Bottom line was that I arrived at SFO at about 9:40 and wasn’t able to check-in at an electronic kiosk. (It also hadn’t occurred to me to check-in online last night or this morning; there was nothing in the confirmation email from Travelocity suggesting it and although I have done so on previous flights, I guess it’s been long enough that I didn’t think of it.)

Anyway, two United concierges very kindly got involved with assisting me. They had to find someone special to check me in, and then, despite some long lines at certain areas of security, I somehow I flew through without being in a line at all (it seemed I was miraculously directed to a line that had just been opened). Unfortunately, because I had forgotten to take the little bottle of water out of my pack (this happens almost every time I fly) so they had to take it out, then run the pack through the machine a second time. I would like to note that the people in security were very friendly as well as professional. My gate, of course, was at the far end of the concourse but when I finally got there, people were still boarding so I was fine.

I am starting to feel that little thrill of excitement in my chest thinking about arriving at the SJC airport.

Would love to work for the airlines or some other travel-related industry, etc. to be able to fly inexpensively, travel more. I could travel every weekend!