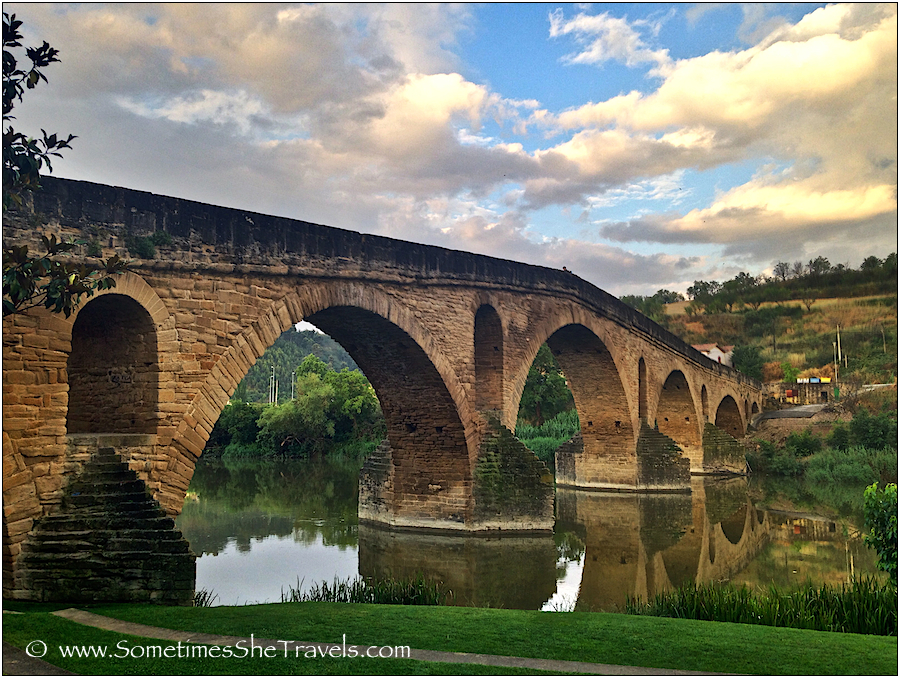 “Returning home is the most difficult part of long-distance hiking; you have grown outside the puzzle and your piece no longer fits.”     –Cindy Ross

“Don’t be ashamed to weep; ’tis right to grieve. Tears are only water, and flowers, trees, and fruit cannot grow without water. But there must be sunlight also. A wounded heart will heal in time, and when it does, the memory and love of our lost ones is sealed inside to comfort us.”― Brian Jacques, Taggerung

She whispers this into the pillow, the giant Spanish pillow that spans the entire width of the double bed, and finds one part of her mind wondering why Spanish pillows are so huge while the other part considers what it means to leave this country she loves, and return home, which, for some reason, she hasn’t missed at all in the five weeks she’s been traveling. 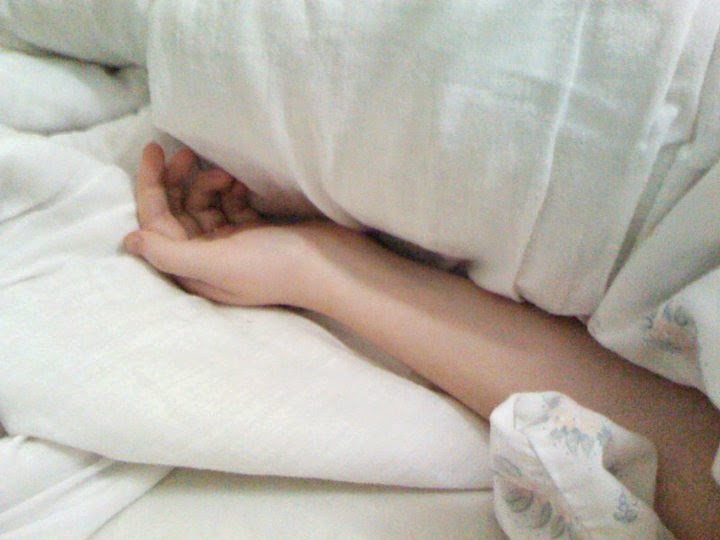 Sleeping in clean, crisp sheets after a month in my synthetic sleeping bag felt heavenly

Soon she will eat her last desayuno or, breakfast, of the trip. Briefly (very briefly) she considers avoiding the customary croissant or pan tostada (toast); she’s been off the Camino for only a week and has already noticed, with dismay, that the weight she lost without even trying during the 481 mile walk is creeping back on. Quickly, though, she dismisses that thought. It is, after all, her last morning in Spain.

She rolls onto her back, savoring the feel of the crisp, clean, white cotton sheets against her skin, a luxury after weeks of sleeping in her synthetic sleeping bag in crowded dorm rooms along the Camino Francés, one of the many routes from all over Europe that lead to Santiago de Compostela, a beautiful and historic city in the northwest corner of the Iberian peninsula. 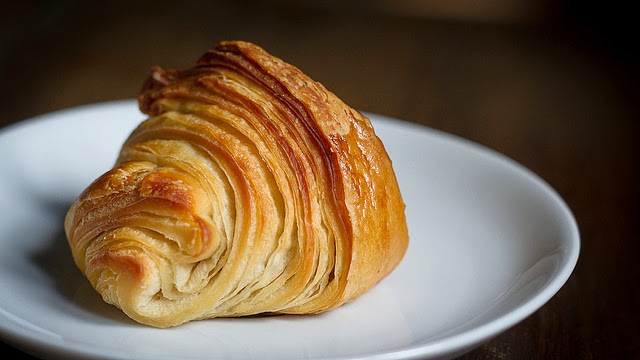 Her last morning in Spain…

Brushing her teeth alone (funny how that word takes on an entirely new meaning after weeks of living communally), in her private bathroom at Hostal Buelta, one block from the Madrid-Atocha train station, she thinks back to all the mornings this past month that she brushed her teeth side-by-side with strangers. She thinks about the rows of stalls, often seatless toilets (what was that about anyway?), showers with no doors or curtains (O Cebreiro), showers with no hooks (almost everywhere), showers that turn off after one minute, strangers spitting toothpaste into the basins next to her, wet counters, wet floors, wet socks…

She asks herself, for the gazillionth time, what is so compelling about waking up with between 10 and 200 strangers at five in the morning to walk fifteen to twenty miles burdened with a nineteen-pound backpack, often in the rain, and more often than not, in the heat? 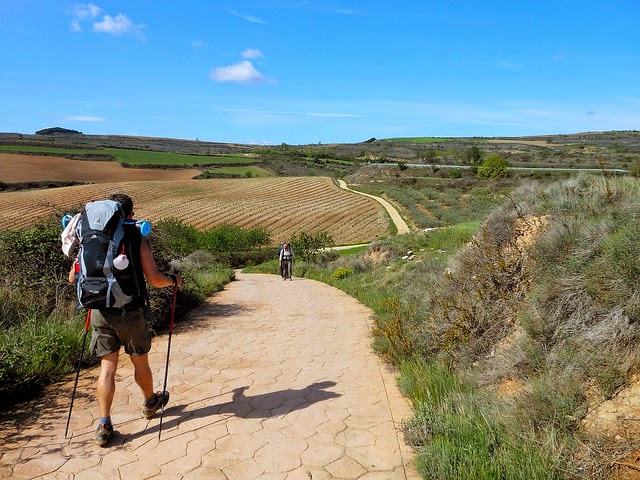 And for the gazillionth time is confronted by the fact that there is no easy answer to this question. Perhaps it is as unanswerable as “why” we decide to do the Camino in the first place.

She recalls a conversation with a friend and colleague back in the spring, prior to leaving for her first Camino. “You’re staying in dormitories?!?” exclaimed her friend. “You’re only taking two shirts and two pairs of pants? You are walking every single day for over a month?!? There is nothing about that that says, ‘vacation’!” 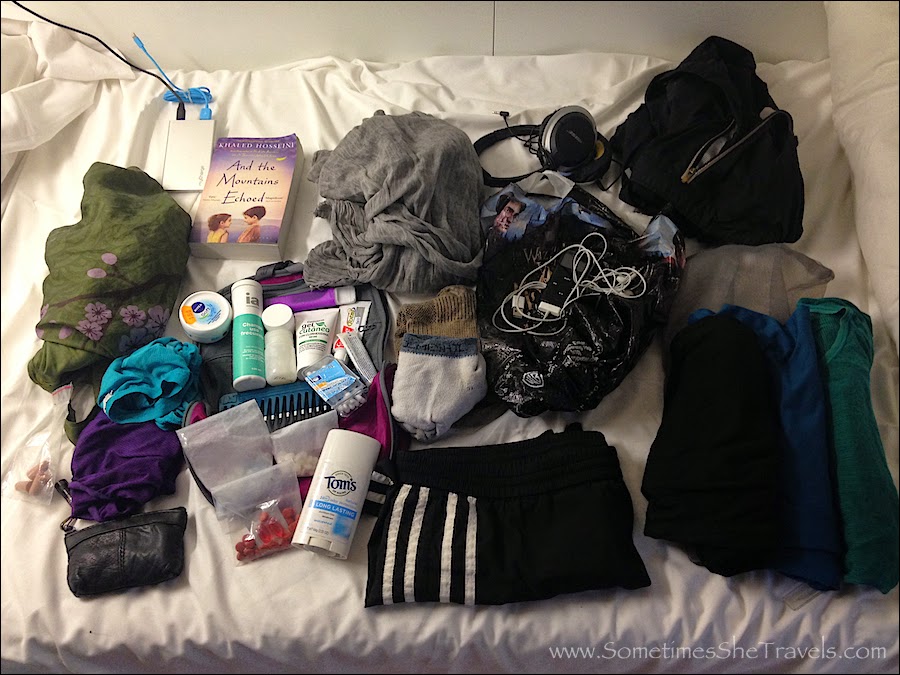 The gear I considered important by the end of my Camino

Who can explain the allure of the Camino? It seems that we are either called to do it or we are not. 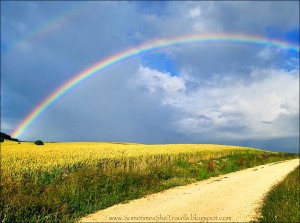 Remembering the days spent under the huge sky, under rainbows and raindrops and clouds and hot rays of sun, remembering the days spent walking through countryside and city alike, remembering the odd and unexpected intimacy experienced with complete strangers, the purple and pink and orange and red sunrises and sunsets, the “second breakfast” every morning, backpacks lined up outside the cafeterías. Remembering all these things brings that telltale tickle to her throat. She doesn’t want to cry, hates crying, is sick of crying (because at times the Camino has seemed like one big cry-fest, but that is a story for later). 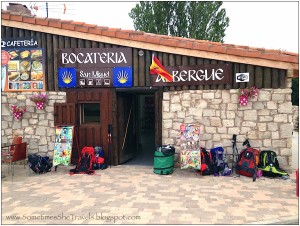 Quickly, to distract herself from the tears welling in her eyes, she begins to dress, pulling on the clothing she has been wearing for weeks on end; the REI quick-dry pants, the SmartWool merino t-shirt, the double layer Coolmesh Wright Socks…the clothing she’s been hand washing every afternoon, line drying in the hot summer sun or on the rubber clothesline she installed each night on the bedposts of her bunk bed. What will it be like to wear, she wonders, say, a pink T-shirt and a pair of jeans? Her Durango boots instead of her trailer runners? A skirt?! Just thinking about her closet (okay, closets…she’s a pack rat) at home, hangers full of shirts, and dresses, and pants, and sweaters, and blouses, and slacks of every conceivable color and texture, brings on waves of anxiety.

Quickly she shifts the direction of her thoughts back to the safety of breakfast. 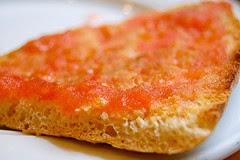 She already knows exactly what she will eat and where. She will grab her last pan tostada in the train station. The train station that yesterday had her in tears, bawling, really (that crying thing again). Few people in her daily life at home, she realizes, have any idea how sensitive she is. Few people know how overwhelmed she becomes in large crowded places airports and train stations. Many people will be surprised to read in this post that yesterday she spent ten minutes sobbing in a bathroom stall in in the Madrid train station because she couldn’t figure out how to use a pay phone, didn’t know which of the umpteen exits to use to get to her hotel, could not find a map of the city, was terrified of being targeted by pickpockets…

She realizes in this moment that perhaps she has been mistaken in conversations she’s had with others about her travels. She is frequently told how “courageous” she is for traveling alone, adventuring solo overseas. She almost always responds by saying, “Nah, I don’t feel fear so it really isn’t courage.” Now, however, she begins to think that, if it is not courage, exactly, it is something akin to it, something that allows her to put herself into these situations where she feels completely helpless and hopeless; where for moments or minutes, hours even, she regresses to some childhood place of incapability. Or perhaps it isn’t courage at all but simply forgetfulness; she never really thinks about these moments during the preparation stages of a trip, or if she does, downplays them in her mind.

Finally she brushes aside these thoughts, gathers together her belongings, exits, and closes the door on the lonely hotel room. Everything she owns is on her back except her walking poles, which she holds in one hand. How she loves these walking sticks that have supported her up steep mountains and down rocky paths that seemed to have no end (Molinaseca, Alto de Perdon…) These poles that have been lost and recovered more than once during the past month since their purchase in St. Jean Pied de Port in southern France in June. She had no idea that first morning she walked with them how important they would become to her, how much she would come to rely upon them.

As she crosses the street to the train station, passing city folk in business attire, presumably on their way to work in the early morning light, the tears well up yet again. She wants to call Yeni, text Suc, say good morning to Bernardo or Kyeong or the speed-walking Spanish couple whose names she can never remember (if she ever even knew them). She crosses the street, tears finally streaming. 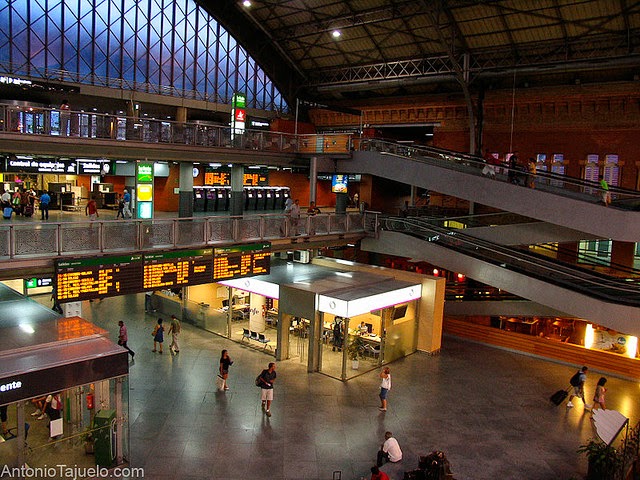 At first when she enters the station, she is confused, turned around, and the confusion drives away the sadness, but she quickly orients herself and finds the coffee bar she is looking for, the same bar where she ate her first bocadillo of this trip some 38 days before. Fortunately, being ignored by the barista also drives away the sadness.

At the bar, she asks for pan tostado but has to make due with a croissant. Fortunately, it is one of the better ones, light and flaky on the outside, just dense and chewy enough on the inside. On the Camino, just as often as not, she ran across the not-so-great-ones, the ones made of the wrong type of dough that has the texture of bread. She washes it down with her final café con leche and it is the perfect last breakfast. 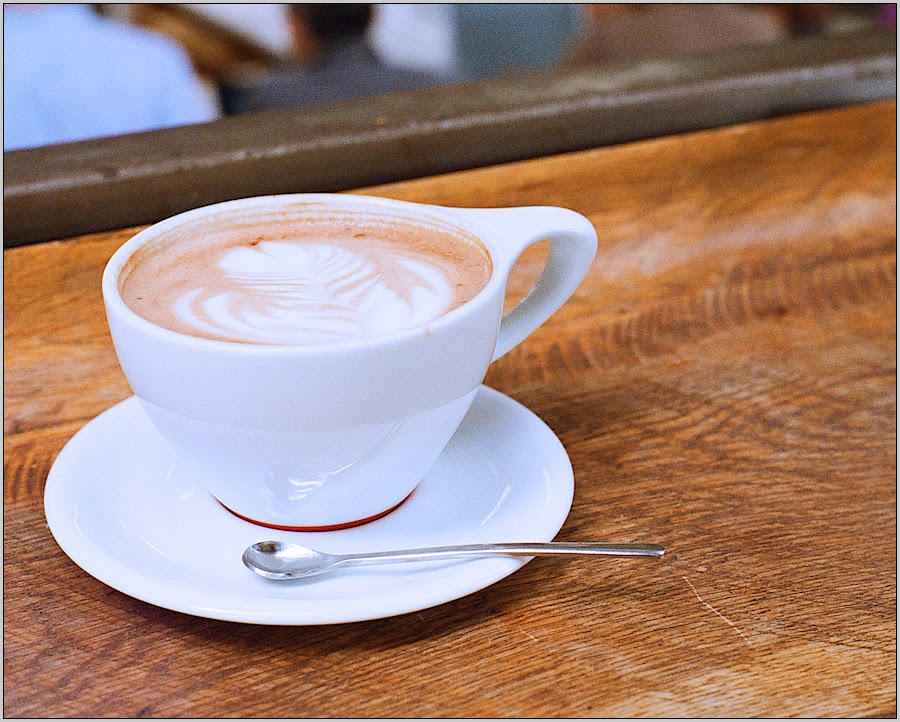 She makes quick work of her meal, then heads to the bank of machines that vend the Renfe train tickets, passing a pay phone on her way, which reminds her of the phone card in her coin purse. She tells herself that when she reaches the airport, she will finally figure out how to use the pay phones and will call Yeni and Suc and say a final farewell to her new friends, to the Camino, to Spain… 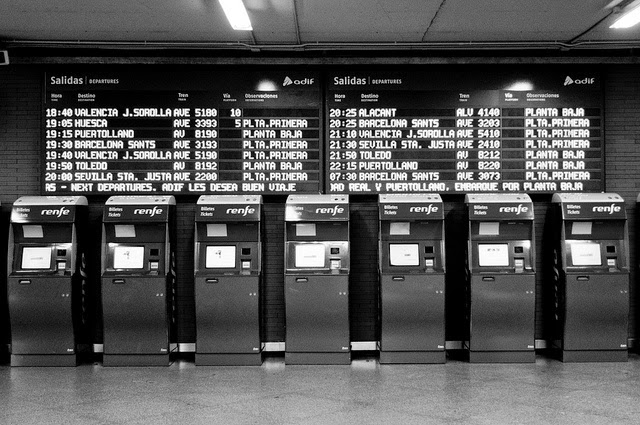 Dedicated to Camino Suzanne from Washington D.C. I look forward to seeing you again on the Way…

© Elissa Greene andwww.SometimesSheTravels.com, 2014. Unauthorized use and/or duplication of this material without express and written permission from this blog’s author and/or owner is strictly prohibited. Excerpts and links may be used, provided that full and clear credit is given to Elissa Greene and www.SometimesSheTravels.com with appropriate and specific direction to the original content.

Finding Your Way on The Way