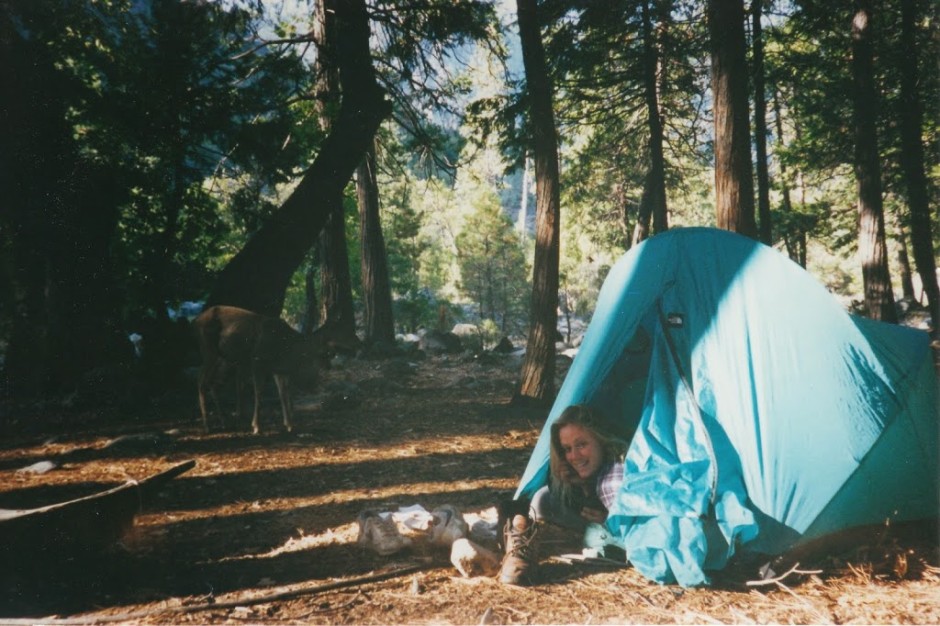 While I had grown up hiking all over the Bay Area, the Sierra Nevadas, and Shasta County, and my family had hosted Pacific Crest Trail backpackers at our family home in Burney when I was a kid (insert post about trail angels), Tom was the person who introduced me to backpacking as an adult, something I’ll be eternally grateful to him for.

At the time Tom took the picture above, we hadn’t yet realized that a bear had stolen Tom’s backpack and had eaten every last drop of food (and anything remotely edible, like the toothpaste! Thank goodness it hadn’t gone for the cosmetics I had in the tent!)

Because we had no food, we were forced to pack out early, and returned home with a mangled tin can of Dinty Moore Beef Stew that sat on my fireplace mantel for several weeks as a rather morbid memento of our adventure.

The weeks I spent in Montana while leading hiking trips in Glacier National park with Backroads were phenomenal. I had never seen anyplace as spectacularly beautiful as as they scenery I experienced there. I’ll never forget my first look at the park though…because it was completely uninspiring.

As my co-leaders and I drove the big red Backroads van full of guests into the park from Kalispell, I was unimpressed, and terribly disappointed since I’d been hearing my mom say for years that Glacier was one of the most beautiful places she’d ever seen in all her travels. “It’s pretty,” I told my co-leaders, “but not any prettier than Tahoe and certainly less spectacular than Yosemite.”

The following evening, after spending the day hiking near Lake MacDonald with the guests and Glacier Guides, my job was to drive the van by myself to the next campground, where I was to secure the group campsite by spending the night there alone; the others would arrive the following morning. Fortunately, my boyfriend Tom, also a leader at Backroads, had a few days off and had hitchhiked into the park where he planned to meet me at Many Glacier.

To make a long story short, I began driving up the incline of Going-to-the-Sun Road toward St. Mary Lake near dusk and crested shortly before the sun sank in the west.

I thought my heart would break.

It was so beautiful.

The sky was purple and orange and red…the cragged mountain peaks were glowing all around me…the lake was on fire. I swear to you that my eyes welled up because I was so moved. And while it sounds cliche, I know, words simply cannot do it justice. And neither can a photo; but this photographer comes close. (I suggest clicking on “zoom”, although I wish it will fill the entire screen. There are some other wonderful shots here.)

Anyway, back to the photo above. That red rain poncho was my dad’s motorcycling poncho; it didn’t breathe at all and was huge on me but it did the trick.

When Tom and I both had some time off, he planned a two or three-day backpacking trip for us on the west side of the park. The second day, Tom and I fished at one of the lakes we had hiked to, which was full of trout. When we gutted one of the fish for dinner, we found….wait for it….an entire, undigested (but beginning-to-decompose) mouse in the fish’s belly.

Not surprisingly, I was unable to eat that darn trout, even after the rodent had been replaced by wild berries and the fish had been baked in tin foil over our campfire.

Walking the Camino: How Do I Get Started?