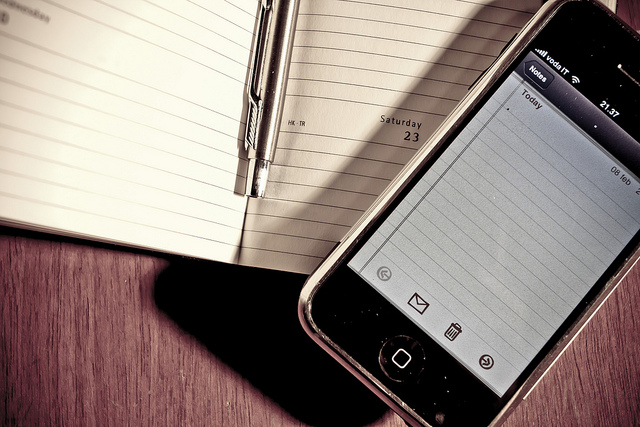 Technology on the Camino seems to be one of the more controversial topics out there. While there are people who feel strongly that electronic devices should be left at home, I took a number of items with me and was glad to have them.

Following is a list of the electronics I took and my thoughts about them while I was on the Camino last summer. (Originally written July 5, 2014). 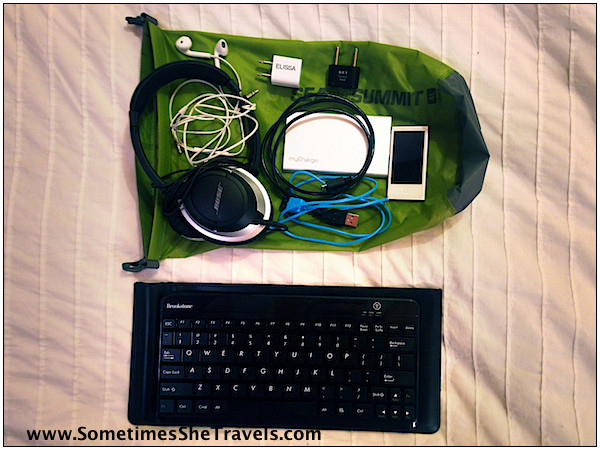 The electronics I had with me on my 2014 Camino and the Sea-to-Summit dry sack I kept them in. (Less my iPhone 5c, which I am using to snap this photo with.)

Power Pack/Charger — I am using a Razor Plus by MyCharge (model RZ30V-A) battery capacity 3,000 mAh with the capability of charging another device while it is charging. I love having it and would definitely carry it again. I charge it as soon as I arrive at an albergue (or whenever I stop at a restaurant or café).

During the day I keep it in my pocket where it alternates between charging my iPhone 5C, which I use for taking pictures and journaling and my iPod. The only thing I don’t care for is having so many cords. (There is probably a way to listen to music on the phone but I didn’t have the energy to figure it out before I left so brought my old, lightweight iPod.) I would, however, buy a larger, heavier power pack, one that would last multiple days charging my devices. (22 extra hours of power).

Note: A friend gave me a Mophie charger, which I am taking. I’m a little concerned because it does not allow me to charge the Mophie and my phone at the same time but I’m going to give it a try. Besides, I like saying, “My Mophie”.

iPhone — It has been very convenient to have my phone with a Spanish SIM card although getting a SIM card has been a bit of an issue that I don’t feel like describing right now. Nevertheless, it’s been great being able to text and call fellow pilgrims and make the occasional reservation at a private albergue.

It’s been so great as a camera that I ended up sending the Sony camera I had purchased for the trip ahead to Santiago. The only sad part about the iPhone photos is that they blur when enlarged much at all but the tradeoff for the convenience and ease of use is worth it. (You can take a look at some of the landscape photos I took while on the Francés here.) Typing on the phone doesn’t thrill me so I purchased a $35 keyboard, which I will comment on below. I would prefer a larger screen so would consider bringing an iPad Mini or iPad Air next time but I wouldn’t bring both. The problem with the Mini would be not being able to use it as a phone for texting and calls. There is a widely used app here in Europe called “What’s App” that does immediate texts, however, and I understand that Facebook has also created a new instant messaging app (I downloaded it a few days ago but deleted it again because did not have the energy to learn how to use it.)

Note (2015.02.26): In addition to using my iPhone for communication and photos, I also used it for blogging, journaling, finding out about albergues, looking up the history of the places I was passing through, etc. For my 2015 Camino, I’m debating whether to go with the iPhone again or to upgrade to an iPad Mini or iPad Air as I found blogging on the little screen to be quite a deterrent and as a result, am still not remotely caught up with my blog posts from last summer!

A number of people have mentioned using dictation in various online Camino forums and groups; I was never able to successfully do so, as much and as often as I tried during the Camino. What I ended up with were a bunch of random thoughts that frequently had wording that didn’t make any sense at all. Soon I will begin playing around with using voice memos because there were definitely times I was walking and wanting to get thoughts down without stopping to write, type, or use my thumbs.

Note (2015.06.13): I have decided to use an old-fashioned spiral-bound college-ruled notebook for my journal. If/when I run out of room in it, I will mail it home and buy a new one!

Brookstone bluetooth keyboard — Great to use when I have the time and inclination to pull it out of the pack, where I keep it in the water reservoir pocket. It came with a leather case and pen-thing, which I quickly shoved in a bag at the bottom of my pack. The keyboard lives in a big plastic Ziploc. I am using it at the moment and it’s definitely better than typing with my thumbs on the screen. I would bring it again. It’s worth the weight.

Bose Noise-Canceling Headphones — For me, a must and absolutely worth their weight. Combined with earplugs and white noise on the iPod, they drown out the symphony of snores that occur in every albergue.

Note (2015.06.15): These headphones stopped working and I was unable to have them repaired. I may buy new ones at the Chicago-O’Hare airport. Or I may try to do without them.

Tiny Headphones — You know, the basic white ones that come with Apple products. Not sure about these. It seems redundant to have two pairs but then again, I wouldn’t use the big ones during the day on the Camino and these wouldn’t do the trick to drown out the snoring since I am such a light sleeper. Not sure.

Cords — The cords for all these items drive me a bit crazy. There has to be an easier way.

Adapter – This adapter from REI allowed me to plug my North American devices into the Spanish outlets. Mine can obviously only accommodate one device at time. If you want to make friends, find one of these that will accommodate multiple devices.

USB Adapter – I needed this for recharging my iPod and iPhone.