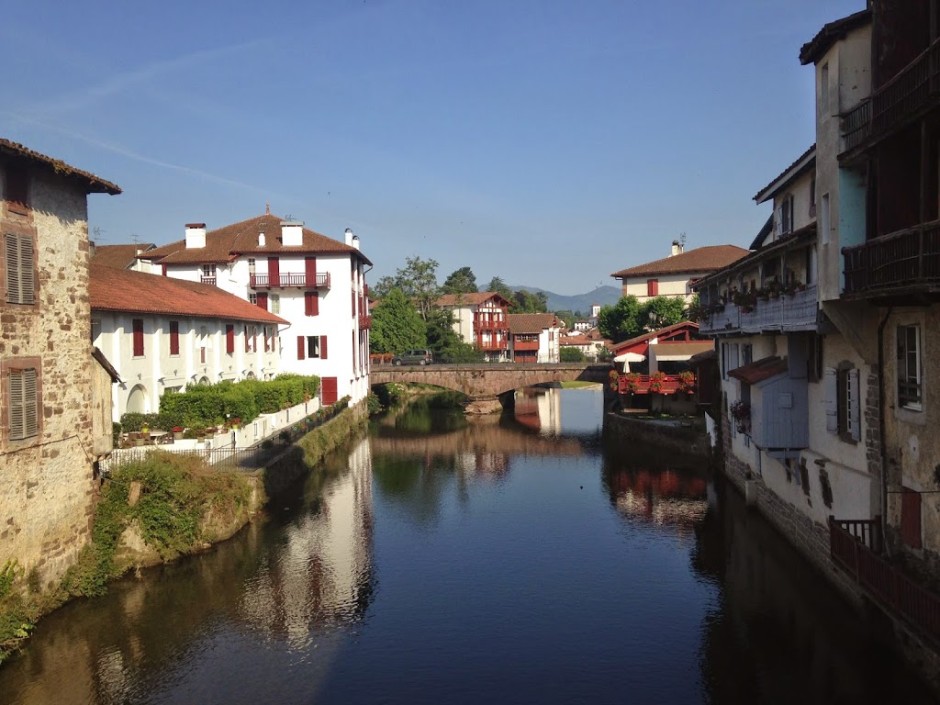 “A journey of a thousand miles begins with a single step.”  ― Lao Tzu 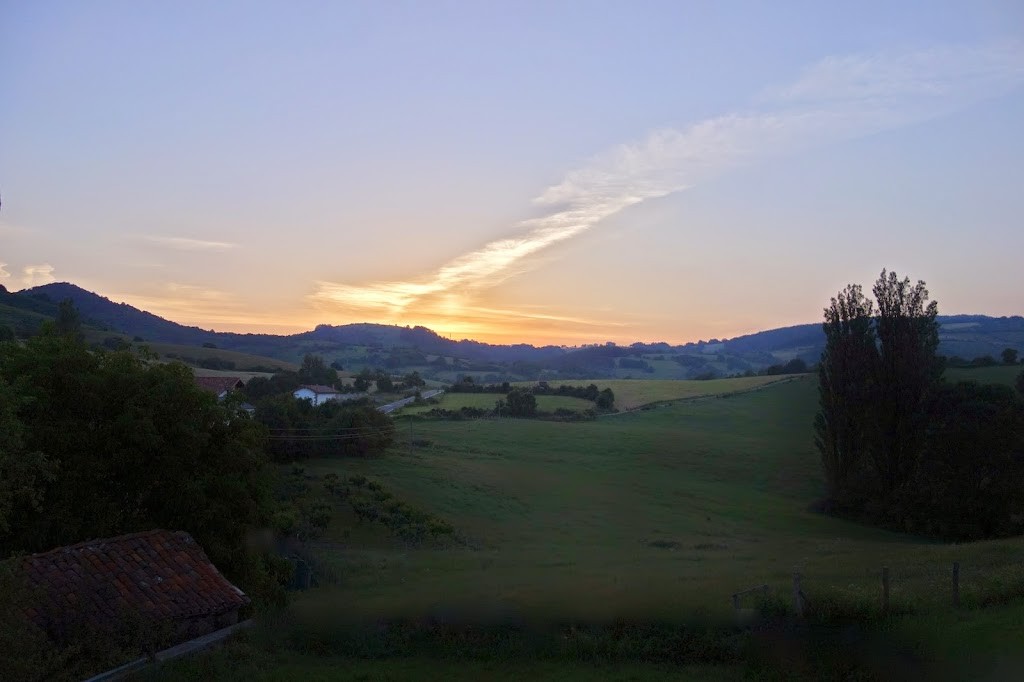 Sunrise from my bedroom at Corazon Puro

The first day of my Camino begins with a beautiful sunrise seen from the tiny balcony of my room at Albergue Corazon Puro. (Note: The original Corazon Puro is no longer in operation.)

Surprisingly, when I join the other pilgrims downstairs, breakfast is a Spanish version of Wheaties. I suppose that eating “the breakfast of champions” isn’t entirely inappropriate on the first day of a 481 mile journey by foot from southern France to the northwest coast of Spain. Toast and jam, a tiny cake, and little “cow” cheese wedges comprise the rest of the meal. Being accustomed to eating protein every morning, usually two eggs over-easy, I am not thrilled, but I’ll survive. My plan is to get some kind of protein in St. Jean Pied de Port, which is where I will begin the Camino.

Deborah and I clamber into Istvan’s car with two women from South Africa who arrived last night after we had gone to bed. Jack and Christine, the couple from Seattle, have opted to spend a leisurely morning at the albergue since they are not starting the Camino until tomorrow morning and there is not enough room for all of us in Istvan’s subcompact car. Istvan will shuttle us all to St. Jean Pied de Port, which is a popular starting place for the Camino and which is where we will all begin our journey to Santiago de Compostela.
The drive through the mountains to France (France!) is beautiful. I can’t believe how green it is. The forest is made up of deciduous trees and there are many wildflowers, including stunning purple foxglove. I become a little carsick on the narrow and windy mountain road but enjoy the scenery, especially when we pass through the darling village of Valcarlos, which is on the alternate route to Roncesvalles that many pilgrims use during the winter.
We arrive at St. Jean Pied de Port about 45 minutes later and Istvan drops us off at the portal to the ancient part of town, which is surrounded by stone walls and is paved with cobblestones. When we walk through the brick and mortar archway and step into the quintessential old French town with narrow streets and planters full of brightly-colored flowers, I feel as though my Camino has truly begun. This is the moment I have been planning for since February, when I decided to walk The Way. 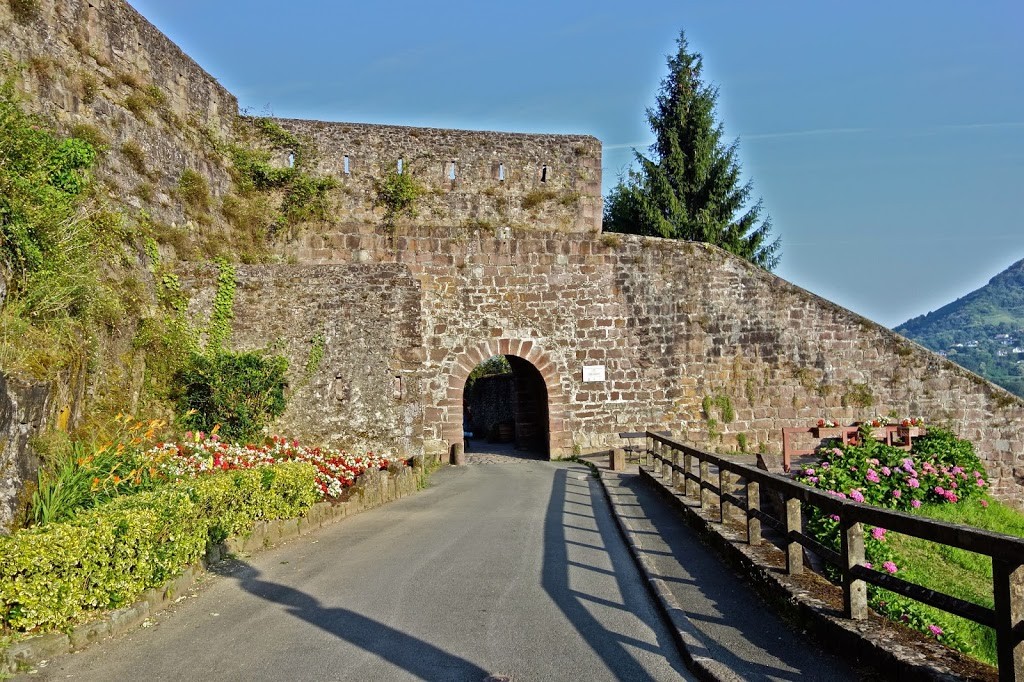 Gate of St. James, built in the 15th century, leads to Rue de Citadelle through the old part of St. Jean 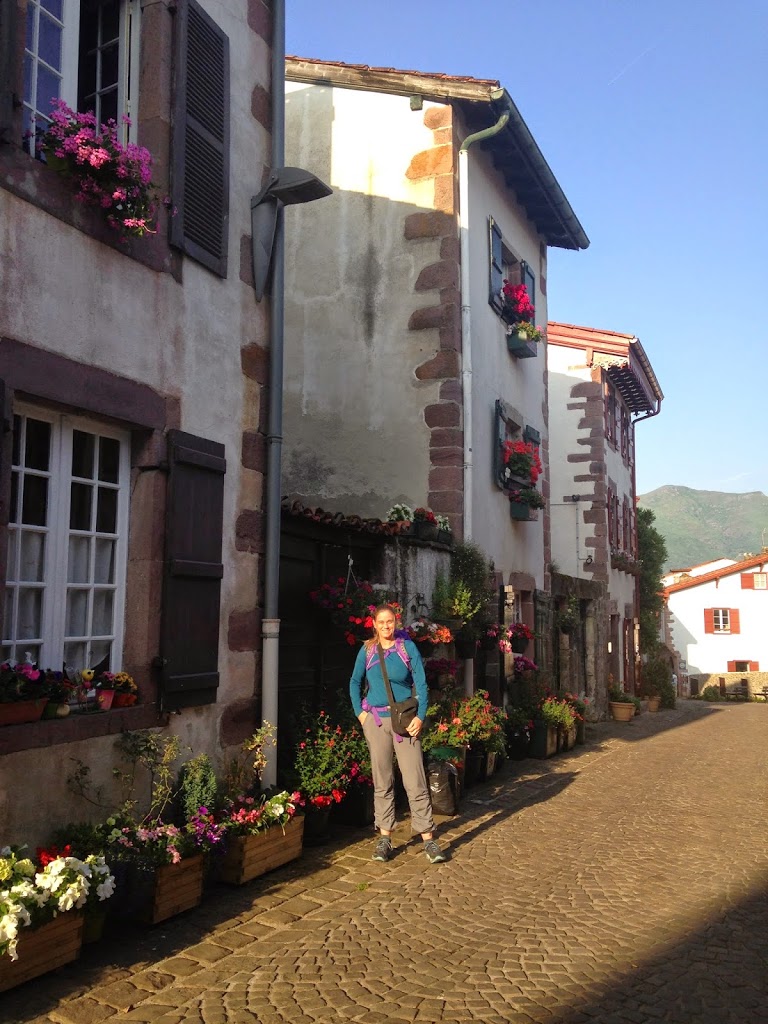 Elissa in St. Jean Pied de Port on Rue de la Citadelle after being dropped off just outside the gate by Barbara and Istvan from Corazon Puro.

The four of us stop to take pictures as we walk down the picturesque street to the Pilgrim’s Office, where we will pick up our pilgrim credentials. It takes only a few minutes to get there, despite the photo ops, and as I walk in the door, I am greeted enthusiastically by a woman named Marian who turns out to be from Tenerife, Spain, in Andalucia, where I lived for eight months 25 years ago, and who has come to volunteer in the office during her one-week vacation. When she discovers that I speak Spanish, she is thrilled and begins showering me with an incredible amount of detailed information about the trip ahead of me, some of which I had encountered online but much of which was new to me. She provided me with wonderful tips of places to see and to stay along the way (the majority of which I couldn’t later remember). After we finished filling out my credential, we took a picture together and then I was on my way… 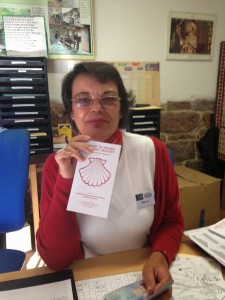 …to find food, a bank, hiking poles, a postcard, and sunglasses (I was so disappointed when I realized I had left mine at home). My first stop was at a butcher shop to get that much-needed morning protein. I bought a local Basque salami that was recommended by the butcher, who spoke English (thankfully, since I couldn’t recall any of my high school French), and who told me that he has family in California. He threw in some jerky as well, which I decided to keep in my shoulder bag to munch on while hiking. Then I wandered around town looking for an inexpensive pair of sunglasses, which was more difficult than I would have imagined but gave me an opportunity to see a little more of St. Jean Pied de Port. 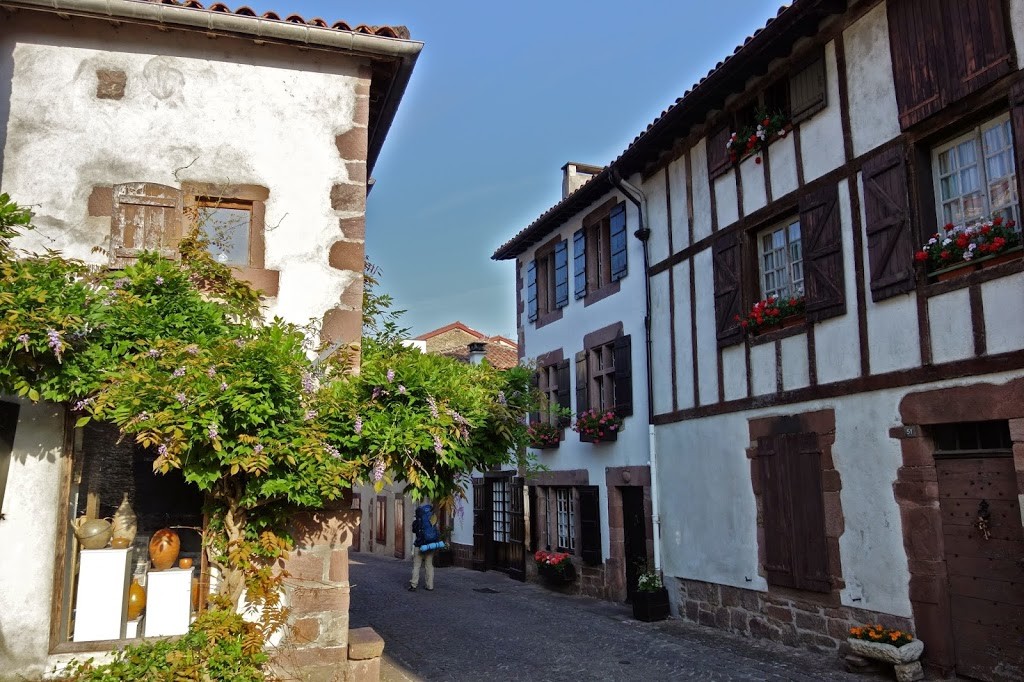 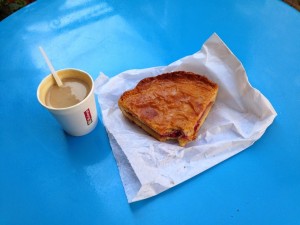 When I finished running my errands, I stopped at a tiny café where I had a chicken sandwich, café con leche, and the most amazing local cake, which is full of cherries and marzipan, two of my favorite things. 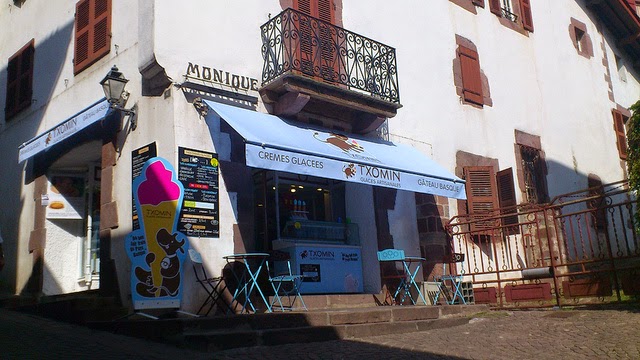 At last I am ready to leave. I walk down the cobbled street, passing a charming view of the River Nive, and begin my journey with a single step…

After the Camino Francés 2014: Night Bus to Pamplona