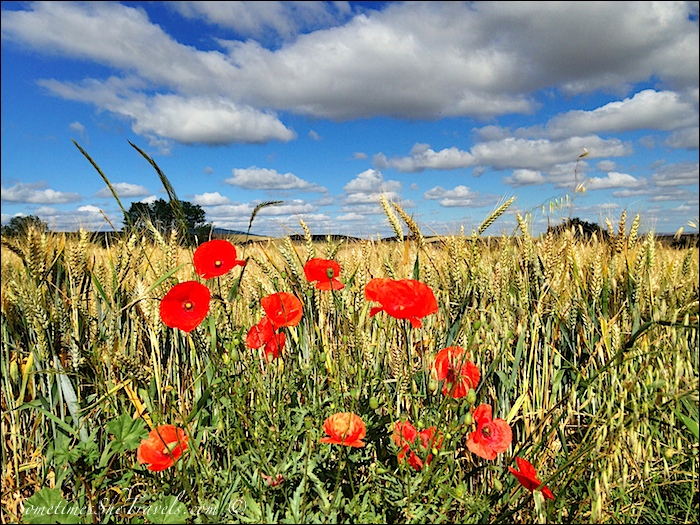 “Just living is not enough… one must have sunshine, freedom, and a little flower.” –Hans Christian Anderson

“Earth and sky, woods and fields, lakes and rivers, the mountain and the sea, are excellent schoolmasters, and teach some of us more than we can ever learn from books.” –John Lubbock

Despite having gotten little sleep because of the lively all-night party that took place in the streets of Nájera in celebration of the Festival of San Juan and San Pedro, I still managed to leave the albergue around 6 in the morning, a habit I had grown to love because it (a) allowed me walk slowly and stop to take a multitude of photographs AND still beat the heat and (b) see the pre-dawn light and watch the sunrise.

There were still small pockets of revelers leaving bars in the pre-dawn, trash-strewn streets and I was a little uncomfortable with the catcalls by groups of young men. It was actually the first time I’d had such an experience on the Camino and I found myself hurrying out of town to avoid them.

The illuminated church of Santa Maria in Nájera glowing in the pre-dawn light.

The beauty of the Church of Santa Maria all lit up, however, stopped me in my tracks. I chose not to linger, however, as the bands of boys continued to roam rowdily through the otherwise abandoned streets.

I felt excited when I saw this beautiful sign telling me only 582 kilometers remained to reach Santiago.

As I left town, the sky began to turn pink and blue, and the clouds pink and purple, and I picked up my pace in an effort to get to just the right spot to watch the sunrise.

As often was the case when I departed this early in the morning, I encountered no other pilgrims and I welcomed the solitude and the opportunity to connect with the beauty around me and to become centered. And as I crested the hill outside Nájera, the beautiful tableau of a country road wending its way through vineyards under a pre-dawn sky opened up before me.

I found myself thinking, as I did often on the Camino, “This is my life. How did I get so lucky?” 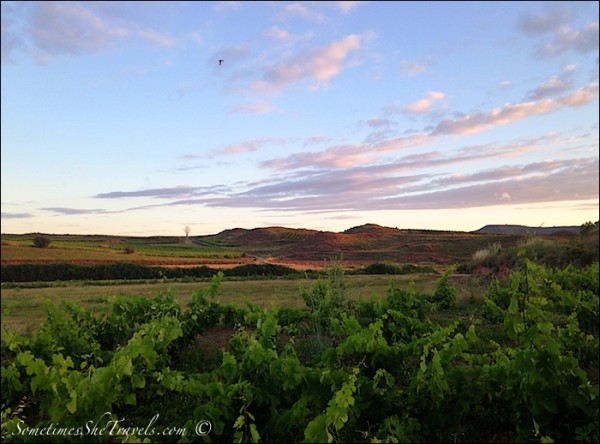 As I walked down into the valley, I frequently turned back the way I had come to catch the changing colors in the sky, to see the clouds turning from pink and purple to orange-gilded gray.

No matter where I looked, the view was spectacular. (Sometimes I worry about boring you with too many photos and I really do try to pare them down but it’s so difficult to do; each photo has it’s own special story to tell…)

Stopping to look back every few minutes inevitably paid off and my westward progress was slow. But my heart was full and I felt grounded and peaceful. 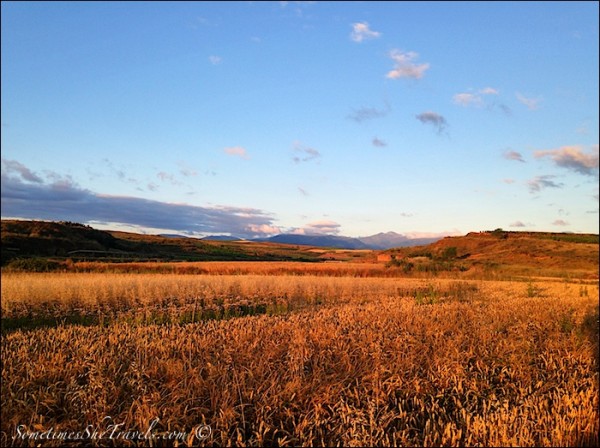 As the sun rose, the colors around me continued to transform the landscape and soon everything was glowing.

I took one last look back at the hills outside Nájera and felt like my heart would break from the beauty of the morning.

There were some funny signs on the Camino. What’s so funny about a “stop” sign, you might ask? Well, as my friend Matt pointed out, it’s pretty funny that it says “stop” in English even though it’s in the middle of the Spanish countryside. And then there is the perros sign. I still don’t know what it says but I remember looking nervously about me, certain I was about to be attacked by wild dogs. (Okay, I just looked up the translation and now it’s even funnier. The translation is, are you ready for it? “Dog training zone.” What is that?)

The morning light on the vineyards continued to make my heart ache. My solo mornings on the Camino were definitely a highlight of the journey. 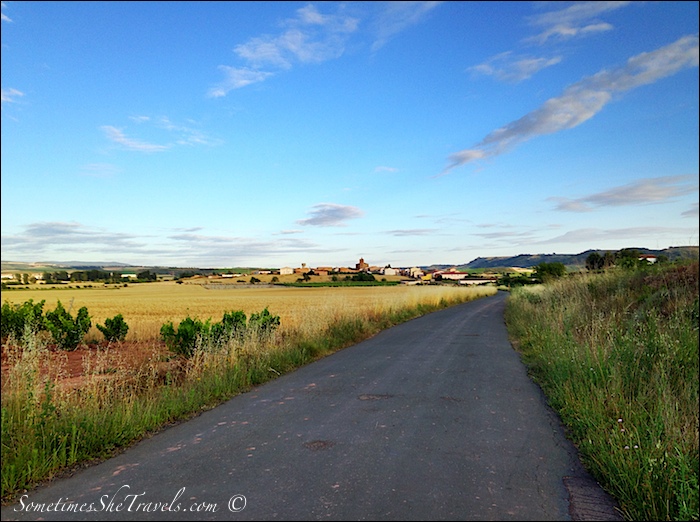 At around 7:30AM, I saw a village ahead in the distance and began my morning ritual of hoping for a café where I could have a café con leche and something to eat, preferably Spanish tortilla, which is akin to quiche or frittata.

It turned out to be a town called Azorfa, and not only was there an open café but I also ran into my friends Ana and Cesar so we breakfasted together. “Second breakfast” was another highlight of the Camino for me. “First” breakfast was typically a banana or apple that I ate while walking. Second Breakfast was a heartier meal that was usually shared with other pilgrims, which was perfect after an hour or two of solitary walking meditation. 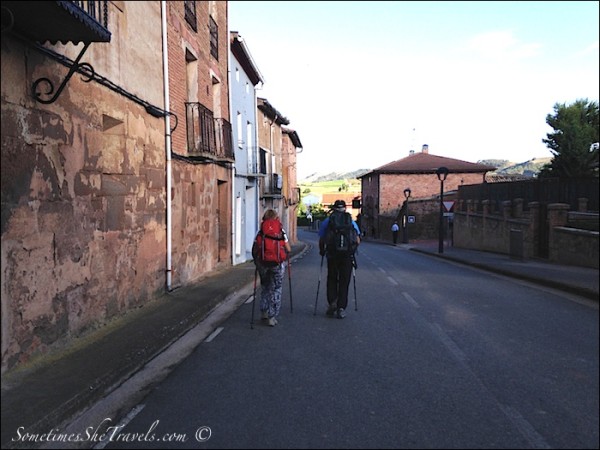 This Spanish couple passed me almost every morning around 8:30.

So, this photo has a great deal of significance for me. It represents so many things, the first one being community. I don’t recall when I first began to notice but at some point I realized that this couple passed me almost every single morning around 8:30. I laughed when I saw them again this morning, and snapped a photo. One day I picked up my pace to keep up with them and introduced myself. Then we began the habit of walking together for a short period of time.

I wish I remembered more of their story. What I do recall is that they live somewhere on the east coast of Spain and they travel extensively. They had driven to their Camino starting point in some kind of a camper, which they spent a great deal of time traveling around in. I remember thinking that superficially at least, they had the type of relationship that appealed to me.

Ana and Cesar stayed just ahead of me for much of the mid-morning. 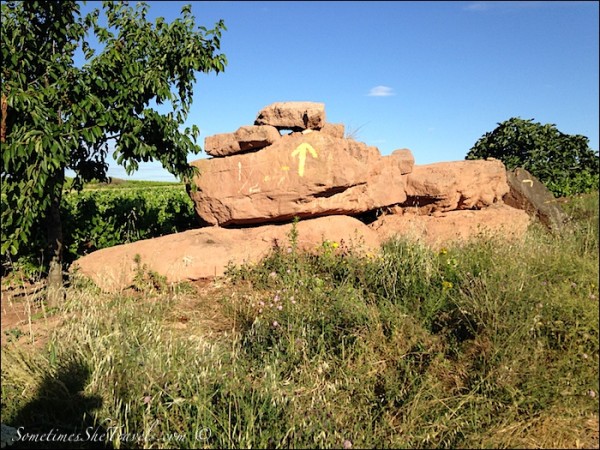 Below are a bunch of classic pretty views taken between 9:00AM and 10:00AM between Azorfa and Cirueña: 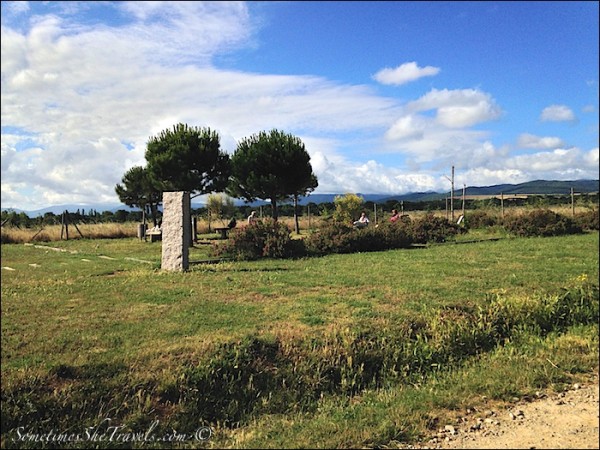 One of the strangest things I saw on the Camino

This subdivision outside the old village of Cirueña was a complete and utter shock. I felt like I was walking through San Jose in the 70’s.

Walking through this subdivision really threw me for a loop. It was so unexpected and almost horrifying. It reminded me of that old movie, Poltergeist, or the city on the planet of Camazotz in the book, A Wrinkle in Time, one of my childhood favorites.

But nothing could prepare me for what was to come next; some of the loveliest scenery I’ve ever experienced in my life… 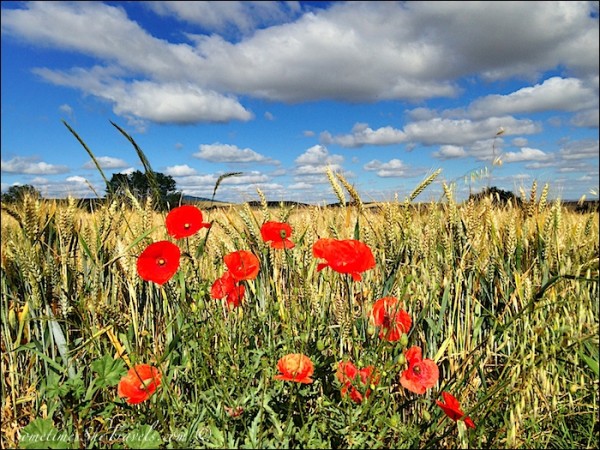 When I showed my students these pictures, they were convinced I had Photoshopped the clouds. (By the way, all my photos were taken with an iPhone 5C using either the Camera+ or ProHDR apps, with no filters.) 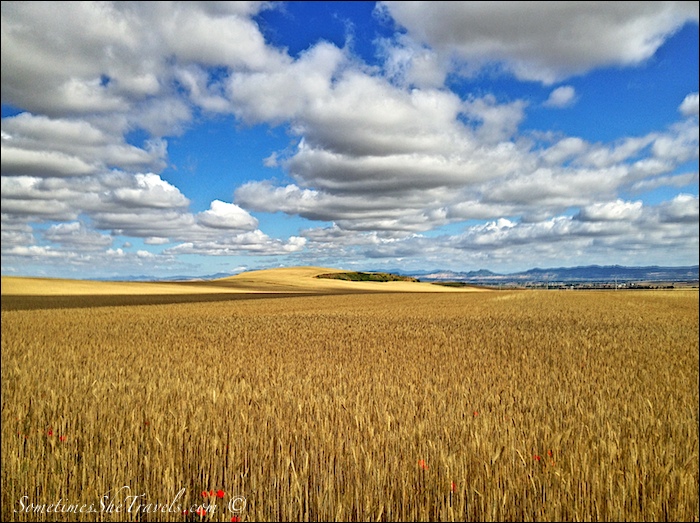 I felt I was walking through a painting. Everything was too beautiful to be real.

Can’t upload photos for some reason but this is indescribably heartbreakingly beautiful. Walking alone with my thoughts and music….it’s Heaven. Favorite day since leaving The Pyrenees…

Finally I arrived on the outskirts of Santo Domingo de la Calzada, where I was thrilled to get shots of these rusty, crusty garage doors. 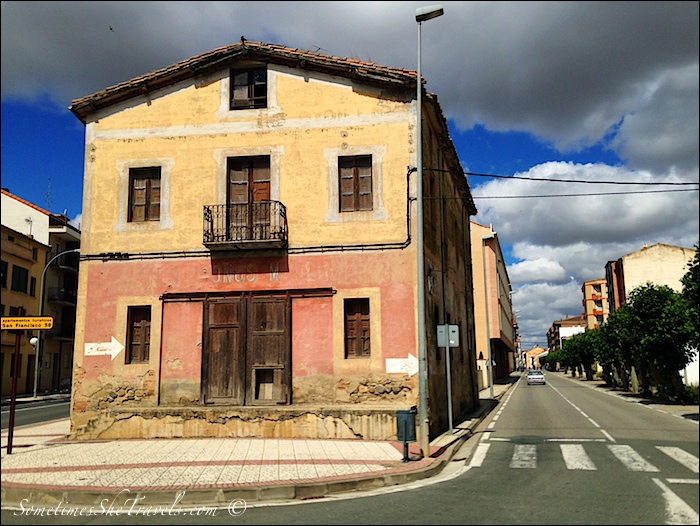 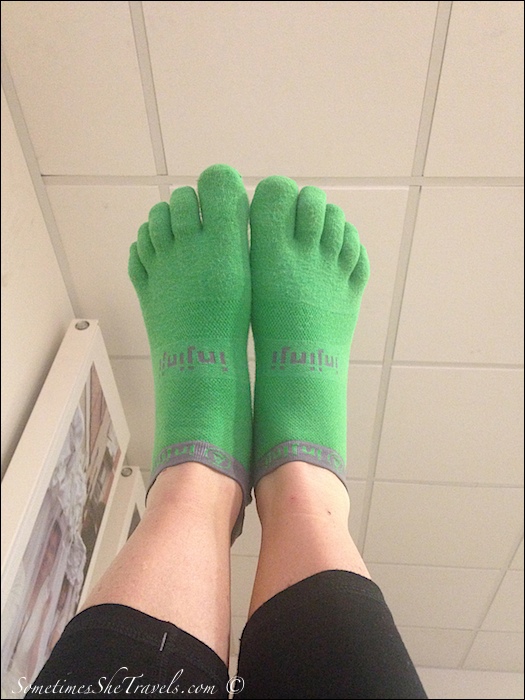 After I checked in at the front desk of the albergue, where I also reserved beds for Yeni and Ana, telling the clerk that they were long-haired beautiful sisters from Mexico, I showered, changed, prepared my bed, did my laundry, and finally, lay down on a couch and put my feet up. (At that time, I still had the Iniji socks, which were fine. By the end of the trip, I had fallen in love with my CoolMeshII WrightSocks and now wear those exclusively to hike). 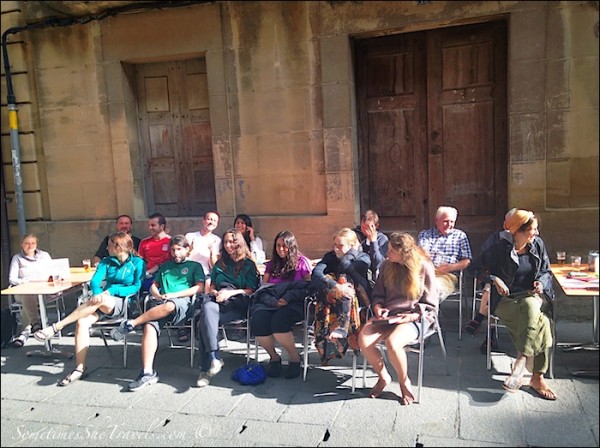 Camino Family: Yeni in front in green; Ana next to her in fuschia, Pavel in back in red.

While the rest of the pilgrims watched the World Cup soccer match at this outdoor bar (the proprietor had placed the TV in the window of the bar so everyone could watch), I wandered around town.

At 10PM, it was lights out. Before going to sleep, I posted the following on Facebook:

Chloe, at some point you asked if I had trained enough but I never answered. Here goes: Did I do “enough” walking of the right type? Yes, just enough. Would more have been advisable? Definitely. Should I have practiced walking with my full-loaded pack more than a couple of times? Absolutely; in that regard, I did not train enough. xoxo

Even after lights out, it was crazy bright in the dormitory because of their “night light”. I took this at 1:55AM. Sadly, I had neglected to take an eye mask.

What’s your story? Did you leave early and walk alone in the early morning light?