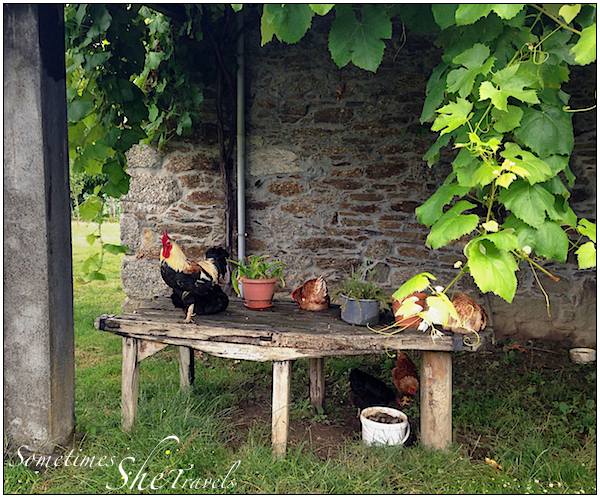 ““We can see a thousand miracles around us every day. What is more supernatural than an egg yolk turning into a chicken?” –S. Parkes Cadman

I’ve always had a special place in my heart for chickens, perhaps because when I was a child living in a small logging town northeast of Redding, I raised “show” chickens as one of my 4-H Club projects.

We actually had a number of chickens and maybe even a rooster; Rhode Island Reds for eggs and some yellow chickens we raised as “fryers”. But I reserved my attention for my two little show chickens, Mickey Spalooka, a splashed cochin, and Peeper, a banty hen.

Mickey and Peeper had special privileges not afforded to the other pullets. First and foremost, rather than sleep in the wooden henhouse, they had the luxury of sleeping in the warm greenhouse where my parents grew seedlings for our giant vegetable garden. Every night around dusk, one of us would walk across the quarter acre lawn of our backyard to the fenced-in garden area, which sported giant compost bins and an old tool shed in addition to the chickens’ quarters. Peeper and Mickey would be waiting by the door of the greenhouse, ready for bed.

One night though, for some reason I don’t recall, none of us made it back there to tuck the chickens in. All of a sudden my mom, who was washing dishes after dinner, heard a tap-tap-tap at the window above the kitchen sink. She looked up and there was Peeper, sitting in the window box, pecking at the window with her beak. Peeper had flown out of the garden into our backyard and all the way up to the house, a place she had never been before. Mom went outside and Peeper followed her back to the hothouse.

Mom decided to test Peeper to see if the window-tapping was just a fluke. So the next night, none of us went to the garden to put the chickens to bed. Sure enough, Peeper once again flew up to the kitchen window and started tap-tap-tapping. Never again did we think of chickens as being unintelligent.

I enjoyed seeing chickens on the Camino last summer, especially chickens in unusual places, like on top of a table. Of course, its being a rustic wooden table under a vine-covered trellis in front of an old stone building lended to the charm. 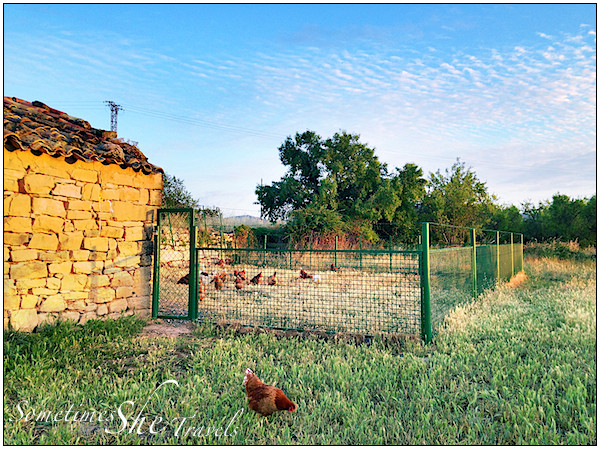 Chickens just outside Torres del Rio at sunrise. One seems to have escaped her enclosure…

By the way, this post was inspired by the artwork of Barb Morris, whose unique Camino journals blow me away! She had posted the journal page below on the American Pilgrim’s Facebook page and in the comments, her Camino companion, Jed, had posted the photograph of chickens under a table that Barb based part of her drawing on. When I saw Jed’s picture, it reminded me of a photo in my collection of a rooster on a table.

Imagine my surprise when I pulled up my photo from the archives and it was the exact same table, and presumably the same chickens, less than a month later! 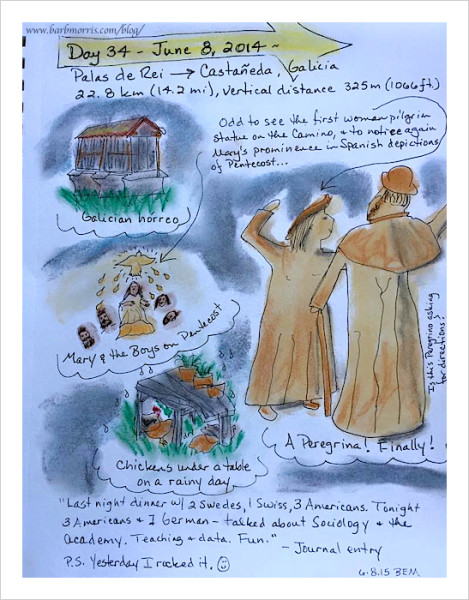 (Image used with permission from artist.)

AutobiographicalCamino Photo of the Day