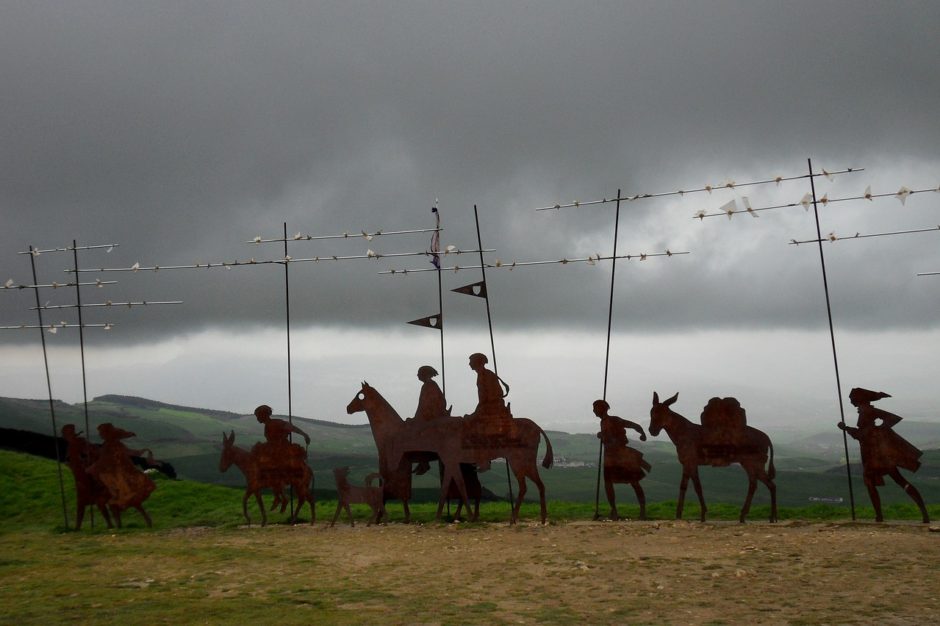 It’s April 4, 2014 and a little over two months before I leave my home in the San Francisco Bay Area to walk 500 miles on the Way of St. James, or El Camino de Santiago, in northern Spain.

This afternoon I have been sitting on my deck in the warm California sun contemplating what it means to be a pilgrim. Does simply choosing to walk on a pilgrimage path make one a pilgrim or is there more to it than that?

This line of thinking is the direct result of reading the thread, “Do I Really Have to Suffer to be a ‘Real’ Pilgrim?” in an online Camino forum. The poster wrote, “A Camino enthusiast’s dilemma: cold showers, heavy backpacks, crowded dorms…does that really make more of a pilgrim?”

Many forum members responded with a resounding but simple, “Yes!” while others answered in the affirmative in much more detail. Some wrote, “No,” while still others poked fun at the entire thing by joking about vows of silence, etc.

Here is the response I posted:

I decided to turn to my favorite book, the dictionary, to help me arrive at an answer.

The first two definitions of ‘pilgrim’ in Merriam Webster’s online dictionary are as follows:

1) One who journeys in foreign lands.

2) One who travels to a shrine or a holy place as a devotee.

Certainly ‘cold showers, heavy backpacks, crowded dorms,’ will not make anyone more of a ‘real’ pilgrim by either definition. By the same token, having hot showers, a light (or no backpack), and single rooms in hotels won’t make someone less of a pilgrim either.

The next step was looking up the word ‘suffer’, which according to the Google result definition is:

1) to experience something unpleasant.

I couldn’t resist looking up the definition of ‘tourist’ also, which turned up, ‘a person who is traveling, especially for pleasure.’

By dictionary definition then, I will be both tourist and pilgrim.

I wasn’t, however, content to drop the subject so my next step in this intellectual/spiritual/emotional journey was to research the history of pilgrimages. One interesting account said:

During the centuries when the Holy Lands were inaccessible or too dangerous to visit, European Christians developed ersatz pilgrimage practices… Other sites closer to home became favored places of pilgrimage during the centuries when the land of Jesus could not be reached… The second most visited site was Santiago de Compostela in Spain… Visiting these sites was as close as medieval Europeans dared approach a “sacred center” of their historic faith.

The author went on to write his/her opinion of what a pilgrimage is:

Yet the essential nature of pilgrimage, making a transformative journey to a sacred center, remained a powerful metaphor for the spiritual life of Christians everywhere… All are rediscovering the transforming potential of sacred travel, of leaving the familiar behind and seeking out places that have special spiritual significance, experiencing these places in quietude and contemplation, being thus refreshed, and returning renewed and transformed.

Those words resonated with me and I’ve read them again and again. 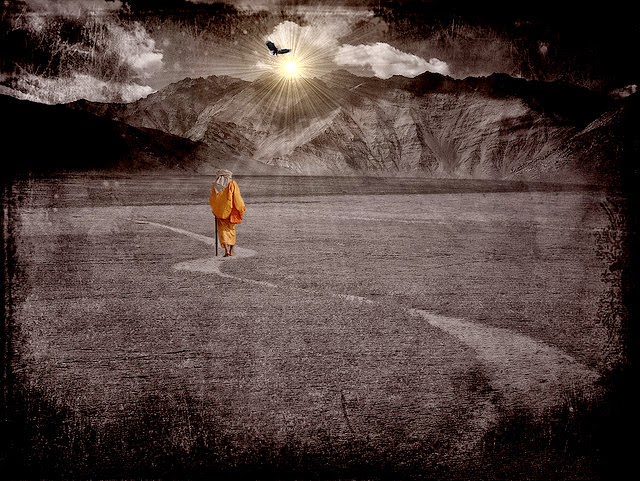 Since reading the forum post about suffering, I’ve spent more time contemplating why am I doing the Camino. (The “how” I came to be doing it is a much simpler question). On the surface, it has felt like “travel” or “tourism”, long-distance hiking. But every so often, I have shared with friends the longing I feel to connect with Source, Higher Power, Divine Spirit, God…call it what you will. I often envy those with solid faith.

Until now my preparation has been focused on the outward elements of my journey; gear, accommodations, logistics. Because of that “suffering” thread, my journey is becoming more inward and introspective, which is a good thing. 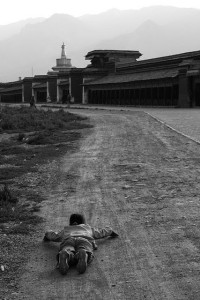 Pilgrim on Kora of Labrang Monastery by Dominic Lüdin

Opinions on this topic run the gamut but ultimately, I am clear that it isn’t my place to decide what a “real” pilgrim is or isn’t or how much suffering one must suffer to be a “real pilgrim”.

The Call of the Camino